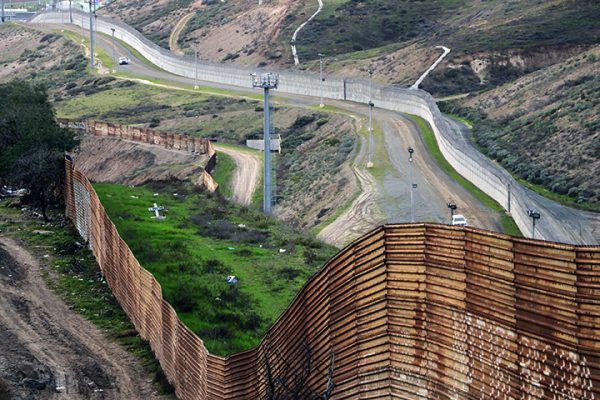 MUJIN-TO Production is pleased to announce Chim↑Pom’s solo exhibition “The other side” starting from February 18th. The exhibition features latest art projects staged along the border wall in Tijuana, Mexico and San Diego, U.S.A., from 2016 to 2017, themed on “border”.

Chim↑Pom has been creating works such as COYOTE (2014, exhibited in NY and Tokyo), U.S.A. visitor center (2016), LIBERTAD and The Grounds (both 2017) dealing with the border issue of the U.S. since 2014. The series of projects including new works is triggered by a member of Chim↑Pom, Ellie’s personal issue that she is restricted to enter the U.S.*, which drew Chim↑Pom to work on borders in various places throughout the history. Also, an international exhibition “Don’t Follow the Wind” initiated by Chim↑Pom in restricted area in Fukushima due to the accident of TEPCO’s nuclear power plants made them realize there are a number of “restricted areas” all over the world.

*The problem occurred when Ellie joined a Japanese TV show shooting in Hawaii. One of the crew was found to be on the black list of American immigration and some people in the group were declined to enter the United States. Since then, Ellie and others have been rejected their ESTA application.

COYOTE (2014)
COYOTE is an installation work created when they were invited to a group show in NY. It consists of a video of a Skype meeting with a gallery staff in NY in which Ellie talks about going to the U.S. from Mexico with a smuggler, so-called Coyote as well as the reference to the pivotal performance by Joseph Beuys, I Like America and America Likes Me (1974).

In this exhibition, we are going to present three works created in Mexico as a sequel to COYOTE.

U.S.A. Visitor Center (2016)
Not only Mexicans but also people from various countries who wish to go to the U.S. gather in Tijuana, the city located on the border of the U.S. and Mexico. There is an area called Colonia Libertad (meaning liberty / freedom in Spanish) by the border in Tijuana, in which many residents are not allowed to go to the U.S.
Chim↑Pom had met a family there who became supporters of the projects. They live in a self-built house in a slum, incorporating the border wall as a part of their ownrooms and garden. In July 2016, Chim↑Pom built a tree house entitled U.S.A. Visitor Center, as a metaphor to the “unreachable U.S.A.” on a large tree in the family’s garden, which stands out in the neighborhood. One of the purpose of the origin of tree houses is said to have been to watch enemies. Now, the tree houses have become an antitheses to materialism and a
symbol of a free and natural life style. Facing the observation tower on the U.S. side in front, the tree house, a place for local children to play in and a visitor center, looks down on the border wall and questions, “What is America? What is the border?”
An additional two works can be viewed from the window of U.S.A. Visitor Center: LIBERTAD and The Grounds.
These two works are inspired by tunnels used for undocumented immigration that are said to exist in Colonia Libertad and each independent work is also metaphorically connected through the two holes in both countries.

Building a grave of liberty on American land – Team LIBERTAD

The Grounds (2017)
The Grounds is Ellie’s personal action as well as a real hole dug on the Mexican side along the border. The hole directs towards the border wall inserted underground. Ellie went inside the hole and left her footprints at the end of that hole, which is in fact U.S. ground. This is the project for Ellie, who cannot stand above ground in the U.S., legally setting foot on the underground earth.

LIBERTAD (2017)
LIBERTAD, is a piece installed on the American side of the wall, contrary to The Grounds. A no-man’s land exists between the old and new border walls, tightly monitored and restricted entry by the U.S. government. At the same time, the area is part of the local Mexican residents’ daily life, a familiar land to throw and pick up garbage, and children to play around in while always staying on guard. Chim↑Pom, forming “Team LIBERTAD” with those people, installed an object comprised of a hole, a cross labeled “Libertad” and a shovel all made with plastic to pair with The Grounds. The cross signifies a grave and the name written on the cross belongs to LIBERTAD, on the other side of hole. LIBERTAD, means “Liberty” in English, which has been a symbolic concept in the U.S. as embodied in the Statue of Liberty, inscribed on American coins, and in its history of being the gateway for countless immigrants. This piece was created precisely to build a grave for the idea of liberty on American land. Executed under such a theme, the reality of people, such as those in Team LIBERTAD including Ellie who are restricted from entering the U.S. and the problems between nations are also buried.

These projects in Tijuana are for Americans who believe in freedom, Mexicans who keep challenging themselves to cross the border, Syrian refugees, evacuees from Fukushima, undocumented immigrants all over the world, and people who have been tossed around by all kinds of borders in contemporary society.
The exhibition title “The other side” is derived from how people in Libertad refer to the U.S. Chim↑Pom chose these words to not limit the issues only to the U.S. At the same time, the project’s completion coincides with President Trump’s inauguration as he signs a series of executive orders – including building a wall along the Mexican border, an immigration ban from seven predominantly Muslim countries and rejecting Syrian refugees – and provoking an unprecedented global crisis. As a number of protests and confusion spread, people from all over the world are now holding their breath to see what’s going to happen to “the other side” of new America.

We believe that this exhibition themed on “Liberty” and “the wall that prevents it” in this time of turbulence and intolerance is timely as ever and necessary for the beginning of 2017. Also, as MUJIN-TO Production, we’d like to deliver the year’s program themed on cooperation and imagination for the others inside and outside of the gallery space in 2017. This is the exhibition we’d like everyone to see now, in such a time of turmoil.