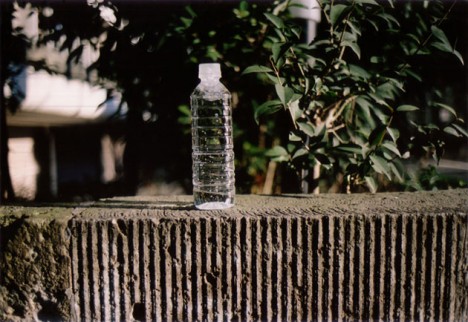 We Mujin-to Production are pleased to announce the upcoming solo exhibition “PET (Portrait of Encountered Things)” by Ryohei Usui. Utilizing ordinary objects as his main motif/medium, Usui has released works that alter our “perspectives” to things already existing in our life, as if making Mitate (an old Japanese term for “metaphor” in haiku culture) updated to the contemporary time.

Three years since the last solo exhibition “encounter” in 2009, the coming exhibition will mainly focus on his new works developed from the “Forbidden Liquid” series released in the “encounter.”

In the series “Forgotten Liquid” featuring plastic bottles left alone on the street, Usui photographed those lonely bottles as if making portraits of people living in the city. Advancing this perspective a step ahead, the upcoming exhibition will present works that capture shapes of such plastic bottles into “sculptures,” objects made out of glass.

Apparently looking like fine glass crafts, they still represent the plastic bottle familiar to us, notwithstanding their weight and touch particular to the glass, even suggesting something like a symbol of subtlety and ordinariness in our ordinary life.

Usui will release his new painting series “Nani Tuskurou (What would I make?)” as well, plywood panels on which a variety of materials are placed still. Works in this series are open to imagination of each viewer, who is supposed to complete the work in his/her own mind. Usui is also preparing a booklet (Zine) “Soft Sculpture,” a photo collection of his weird sculpture series out of Konjac.

The title “Portrait of Encountered Things” stands for his unexpected encounters with things in his daily life. In 2011 we encountered a lot of events far exceeding our imagination. The motif of water bottles, which had once disappeared from the stores right after the earthquake, and the beautiful and fragile materials used for works in the exhibition, overlapped together, may remind us of the still ongoing instability surrounding us. Please look into the critical vision of Usui deep inside works with subtle and smooth appearances.