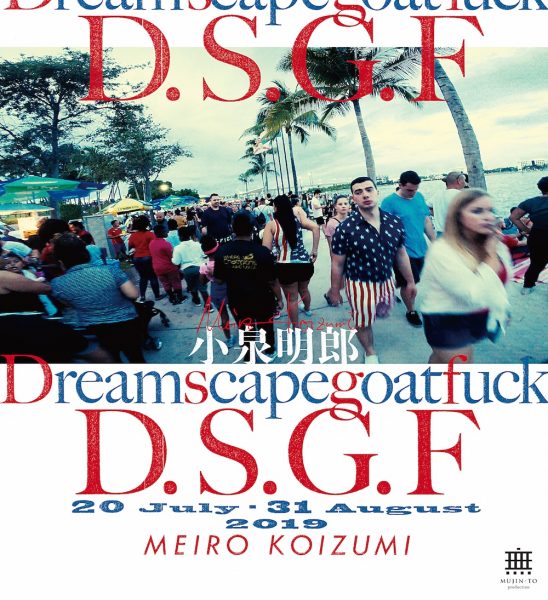 MUJIN-TO Production is pleased to announce the first exhibition “Dreamscapegoatfuck” by Meiro Koizumi, after having moved to a new location in Sumida-ku, Tokyo.

The video installation Battlelands (2018) was created at the request of Pérez Art Museum Miami, USA. Koizumi visited Miami many times to produce this work. The film was shot with the help of seven United States veterans who served in the wars in Iraq and Afghanistan. Koizumi had them blindfolded, mounted bodycams on their heads, and asked them to verbally depict everyday life in the current homes and the cities where they live. And in the very same place, he asked them to recount the moment they felt most stressed at the battlefield. Koizumi edited these two types of images as a seamless mixture of images, which make the viewers feel as if the war is adjacent to their daily lives.

What influence does the ultimate state of war and destruction have on people’s memories and their daily lives? And what is the personal “choice” for soldiers in a situation that they must obey orders? How long the emotional battle will last? This work is the result of Koizumi’s attempt to battle against these questions, that are underlying the glamorous American Dream.

Paired with Battlelands is Sacrifice (2018), Koizumi’s first VR installation. Koizumi travelled to Baghdad to shoot this film after the completion of Battlelands. Ahmed, an Iraqi youth who cooperated with him, is in a position opposite to United States veterans, as his family was killed in the Iraq War. The viewer is virtually embedded in Ahmad’s body and listen to his experience while superimposing one’s body to his. The narrative begins with his childhood memories and invites the viewer through the day the war began, to the moment the family was killed in front of him, and eventually to the inescapable abyss of his trauma. What does the title, Sacrifice means for whom and for what? It will be an experience facing the limit of the notion of body against today’s remarkable advancement of technology.
(Sacrifice will be screened prior reservation. Please reserve the seat in advance. reserve seat)

Battlelands has been exhibited in Miami, London, Minneapolis, Madrid and Amsterdam, and Sacrifice has been presented in Seoul, Abu Dhabi and Amsterdam. This exhibition is the first time to exhibit these two works together. There is a contradiction that viewers experience the real tragedy of other human beings from a safe distance either in virtual space or on screen. Can one really imagine how much fear, hopelessness, and pain are involved when such tragedy actually occurs to oneself? The reality for somebody is always unreal for others. It is impossible to get close to the emotions of others, even if you try to cross the invisible wall that separates you from others by using imagination alone. Koizumi uses this impossibility as a starting point to create his art works. And the sculpture work Sleeping Boy (2015) plays an important role to connect these two installations that make the viewers to relive the reality of both the perpetrator and the victim.

Koizumi had suffered with the image of his son’s death for a few years after his son was born. When he became a father, the image of a dead son started to appear like a flashback in his head, and he became aware of the existence of paternal instincts, which is to protect the child regardless of being threatened by such nightmarish image. In order to deal with this anxiety, Koizumi made a sculptural work shaping his son’s head and limbs with clay by the side of his sleeping son.

Different from Battlelands and Sacrifice that deal with real experiences, his son’s death is a virtual image that appears in Koizumi’s mind. However, in Hollywood movies, in the press, and in the war testimonies, how many images of dead children, missing children, and injured children we see? Koizumi believes that the instincts of defending and those of fighting are inextricably linked, and the world is driven by those virtual images that haunt our unconsciousness.

By using visual media as a device to stimulate the empathy, Koizumi has been trying to visualize collective unconsciousness and desire behind the representation of the war. We would like to invite you to experience Koizumi’s new challenge in MUJIN-TO Production’s new space.