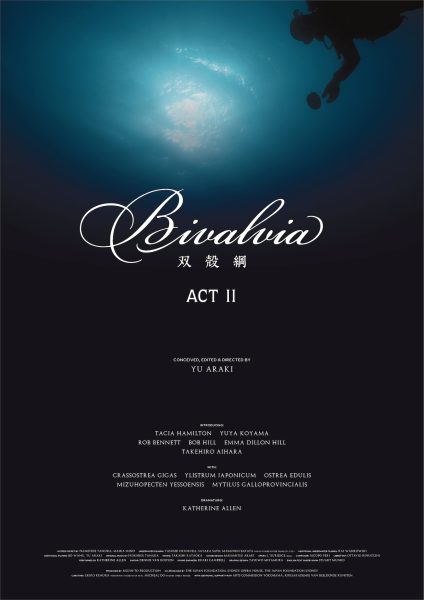 Open: Tue. – Fri. ｜13:00-19:00 ／ Sat・Sun｜12:00-18:00
Close: Monday, holidays and Feb.17
※ We are not holding opening reception for the exhibition.
※ The opening schedule is subject to change depends on the circumstance with Covid-19. Please check the website before visiting.

This exhibition is the second act following Araki’s first solo exhibition at MUJIN-TO Production, Bivalvia: Act I held in 2017. Four and a half years after the release of the previous work, it is finally time to introduce Bivalvia: Act II.

Bivalvia: Act II, the main video installation of this exhibition consists of two different video works that are reminiscent of “right shell” and “left shell”, like bivalves that are divided into left and right. These video works were presented in two separate online exhibitions, “11 Stories on Distanced Relationships: Contemporary Art from Japan” (Japan Foundation) and “Returning: Chapter 1” (Sydney Opera House), held last year during the pandemic. The works were introduced one by one. Both works were shown at the online screenings without physical exhibition, so this will be the first time that the two works will meet in a more updated form in a physical space at MUJIN-TO Production.

Araki conducted underwater filming which is supposedly low risk of infecting of Covid-19 to make “Right”, which comically expresses the silence and the feeling of obstruction associated with the hard-shelled bivalves. “Left” is based on the oldest existing opera work “Euridice” composed by Jacopo Peri in the 17th century, collaborating with an opera singer which was realized with the cooperation of the Sydney Opera House.

We hope that you will experience the space created by the two mysterious and comical works that reflect the elements of allegory and mythology and the current social situation inevitably influenced by Covid-19 while using the bivalve as a motif.
MUJIN-TO Production

A note on Bivalvia: Act II

Once upon a time, a shell split in two halves. The right side was dropped into the ocean of the Northern Hemisphere and the left side was thrown into the Southern Hemisphere. When the right shell and the left shell were separated from each other, they began to have their own will. They searched for the lost counterpart in the ocean, day in and day out. There couldn’t be any alternative in this entire cosmos, other than themselves. Searching continued, and it has already been 550 million years since they dreamed of the moment when they would reunite…

As a sequel to “Bivalvia: Act I”, the structure of “Bivalvia: Act II” is based on Kai-awase, a Japanese game with shells to find the other fitting half. It is a 2-channel video installation in which screens are divided, and two videos are played back in loop and also in an unsynchronized manner. Each with a different duration, the two videos carry multiple scenes that have the potential to be synchronized and match under a certain probability throughout the exhibition period. Will the visitors be able to witness this perfect moment? This will be totally up to chance.

This new installation, which was made amidst the COVID-19 pandemic, reflects upon reconnecting with the others in this divided world.