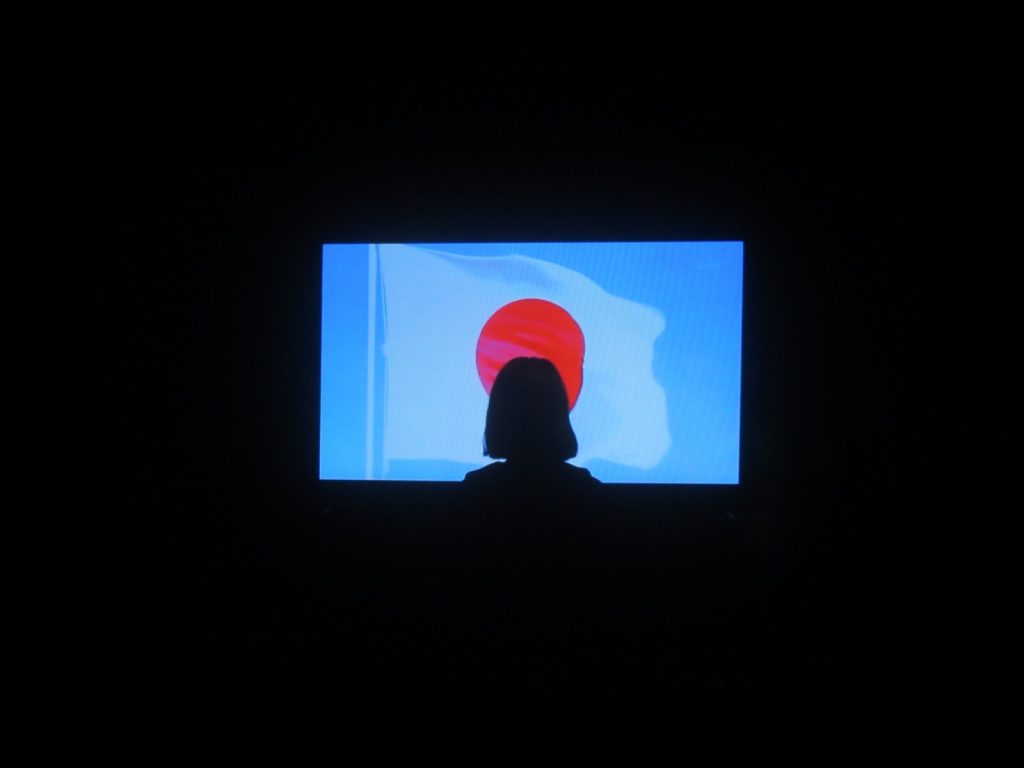 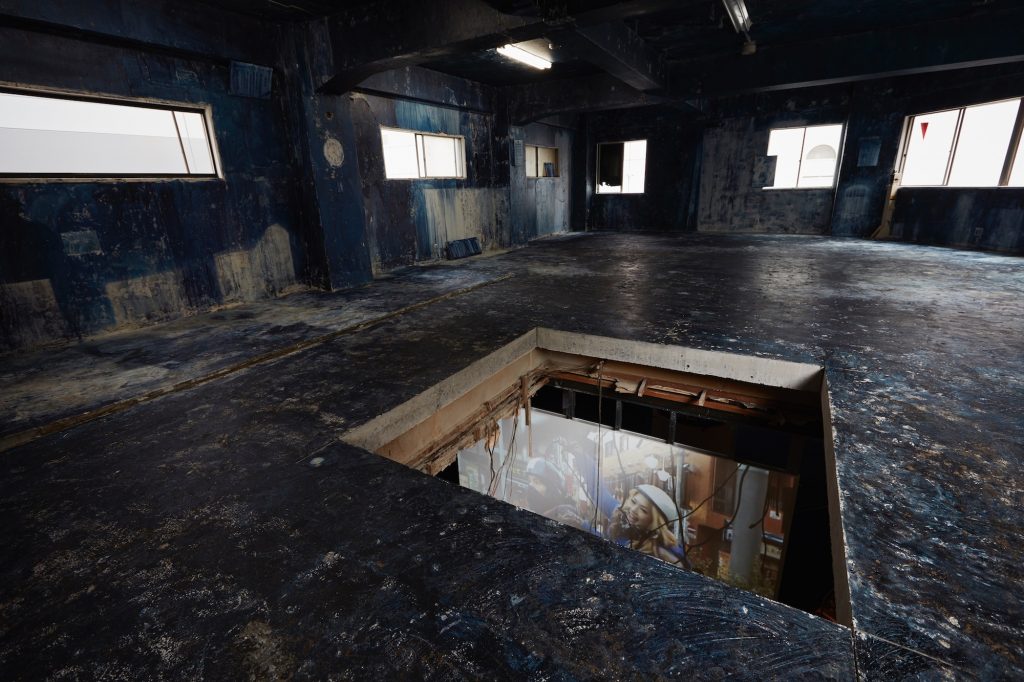 drawing a blueprint version 2, 2016, Cyanotype, so-called “blueprint,” was exposed to light and printed in the office of the Kabukicho Shopping District Promotion Association. “Blueprints” have supported architects as prints of architectural drawings in the 20th century, but its demand had fallen sharply in the 21st century. On the other hand, the Japanese idiom “drawing a blue print” is a popularly established saying that is used in the sense of drawing one’s vision for the future. Kabukicho Shopping District Promotion Association has been responsible for promoting Kabukicho for 50 years. The traces of the history of the people who drew the vision of this very city during the 20th century is drawn out as a “blueprint.” 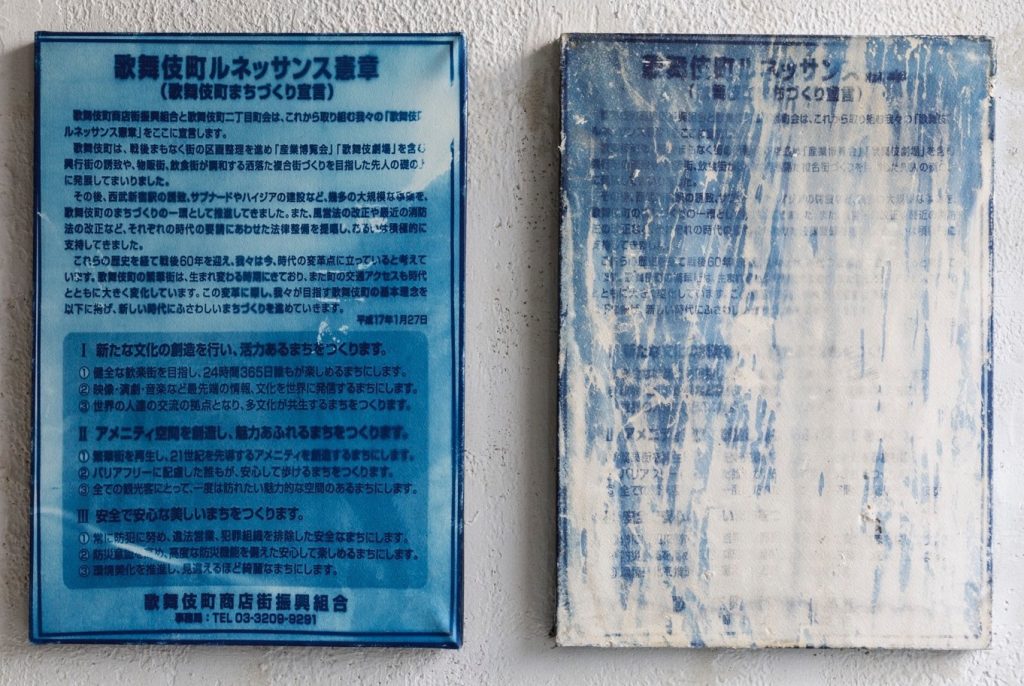 RENAISSANCE Charter, 2016, As part of the installation for drawing a blueprint version 2, Chim↑Pom created a panel piece using some of the symbolic items found in the office of the Kabukicho Shopping District Promotion Association. The “Kabukicho RENAISSANCE Charter,” along with other community revitalization and town development projects, centers on such initiatives like the “Cleaning Operation Project” that promotes safety and security measures to dispel the stereotype of Kabukicho as a scary and dirty city, in collaboration with the local government, fire department, police, immigration control office, and private institutions. The “Cleaning Operation Project” is also known as the “Kabukicho Cleansing Operation,” which was initiated by the former Governor of Tokyo Ishihara in 2004. The project stood in contrast to the bid to host the Olympics in Tokyo, and has become an important topic in discussing Japan’s gentrification issues. 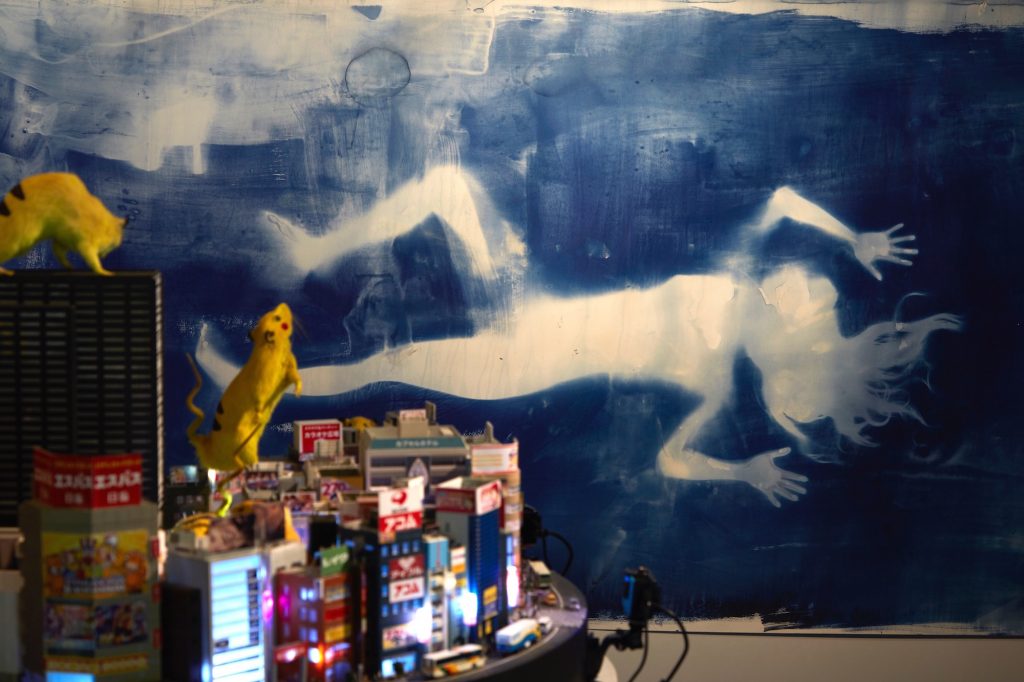 Drawing Mirai, 2016, The silhouette of Kabukicho’s sex worker Mirai (age 18) is printed on the wall using blueprinting. Sex industry, sexual minorities, violence, culture, entertainment and aliens... Kabukicho continued to allow various ways of living. Chim↑Pom depicted the figure of Mirai, with a self claimed name which also means future, in this place where many lives intersect. 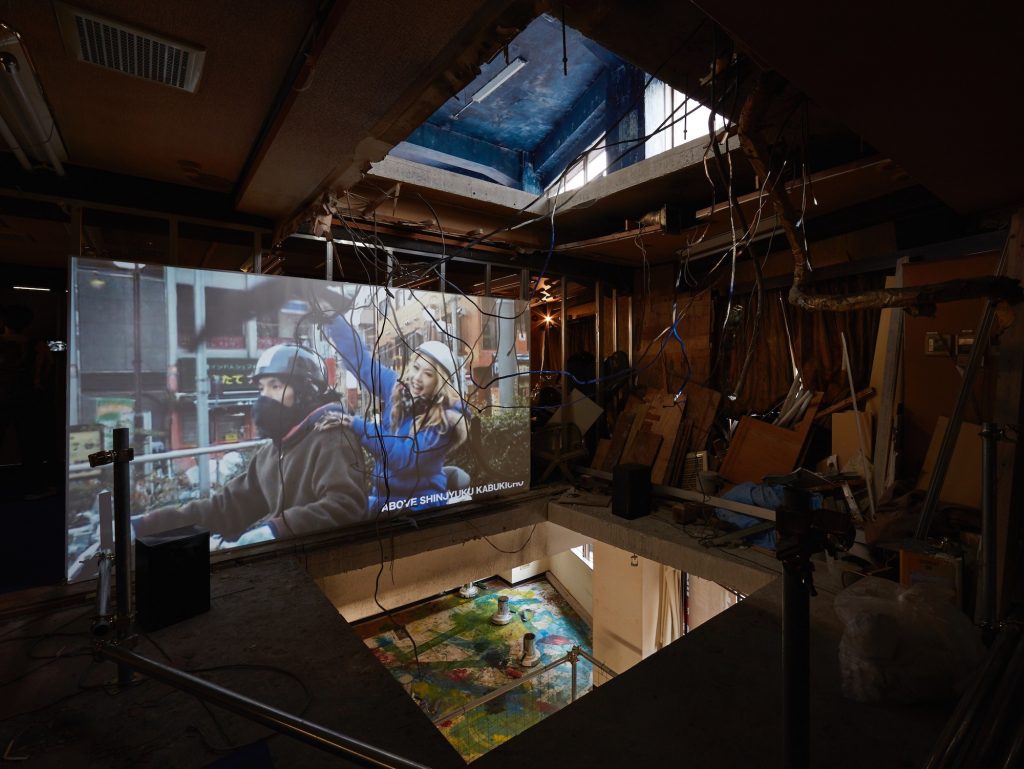 BLACK OF DEATH, 2007, 2013, In this guerrilla art act , Chim↑Pom attracts crows, using a stuffed crow and the recorded sounds of crow calls playing from speakers. Utilizing the natural behavior of crows to save fellow captured crows, we managed to gather many crows in front of Japan National Diet Building and in the busy streets of Shibuya. Crows that infest all over Japan including Tokyo have been evolving and becoming smarter like super rats as they gain nutrition from food waste and improve resistance towards extermination. In 2013, the idea was used again and assembled crows that proliferated whilst feeding on livestock left in the exclusion zone in Fukushima and shepherded them out of the zone. 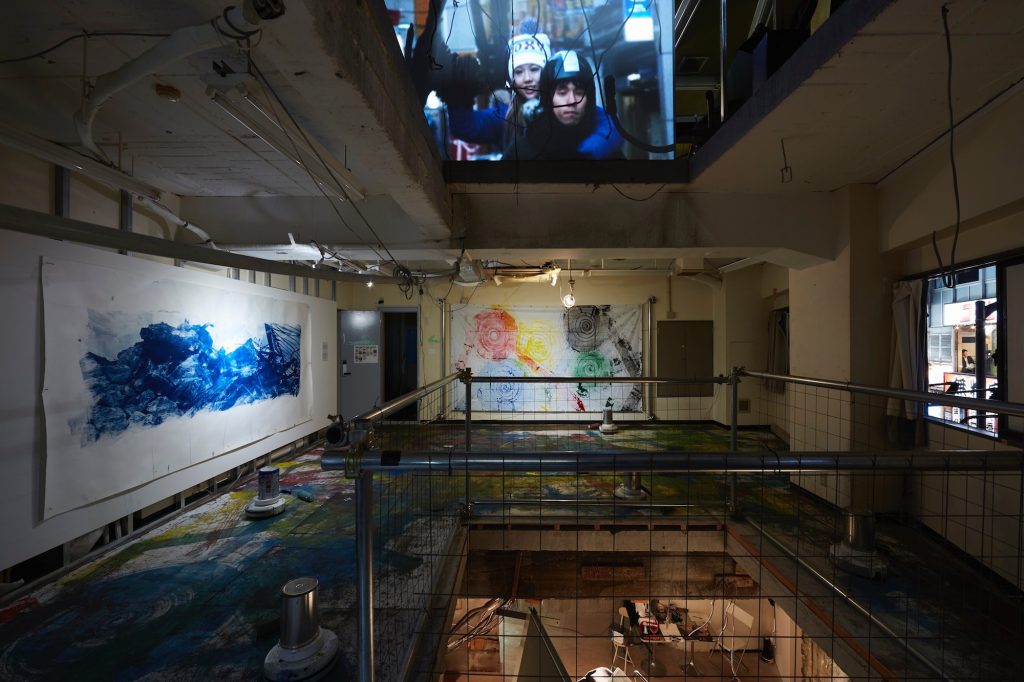 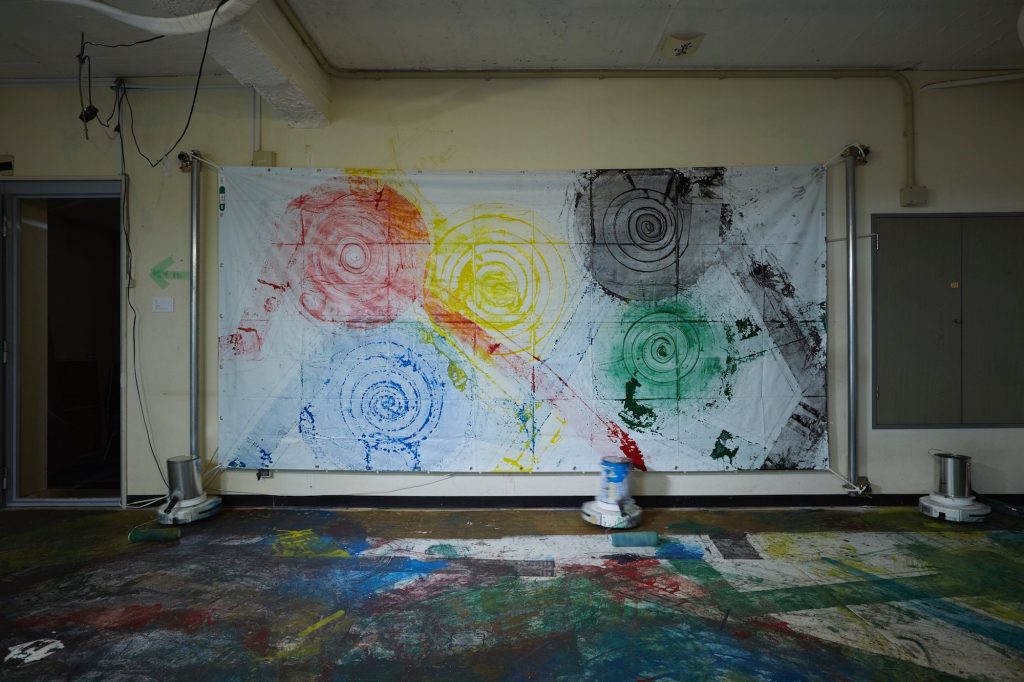 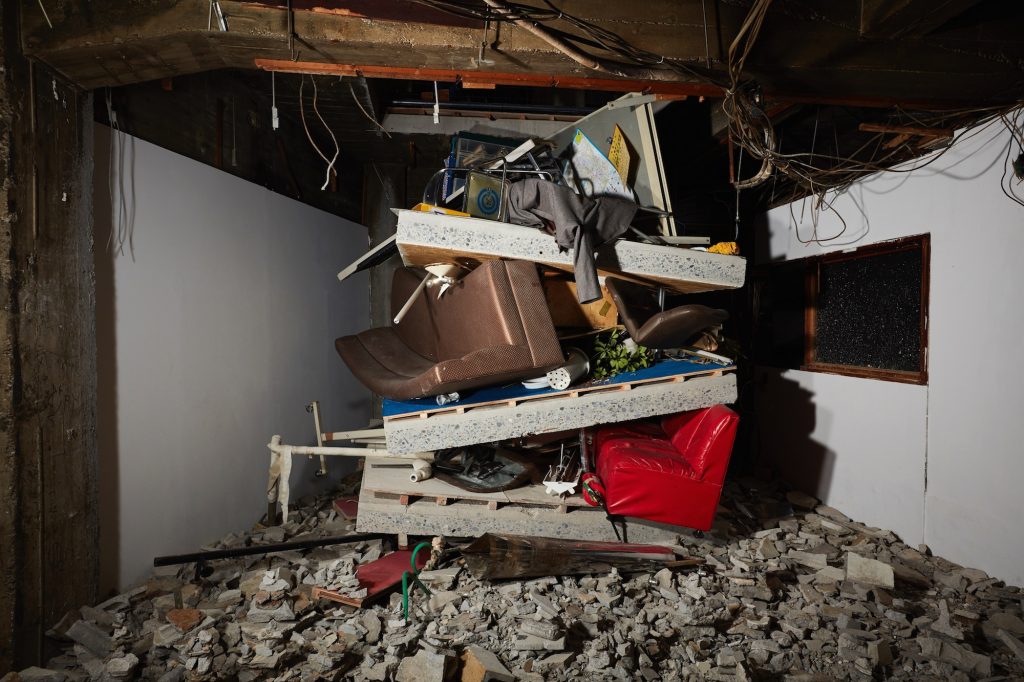 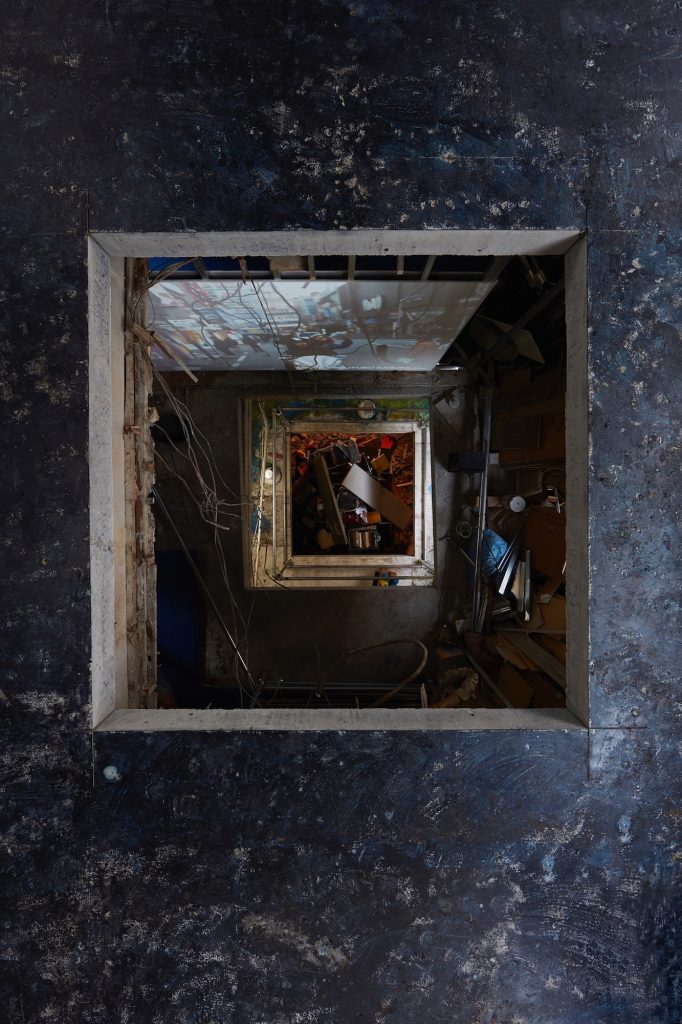 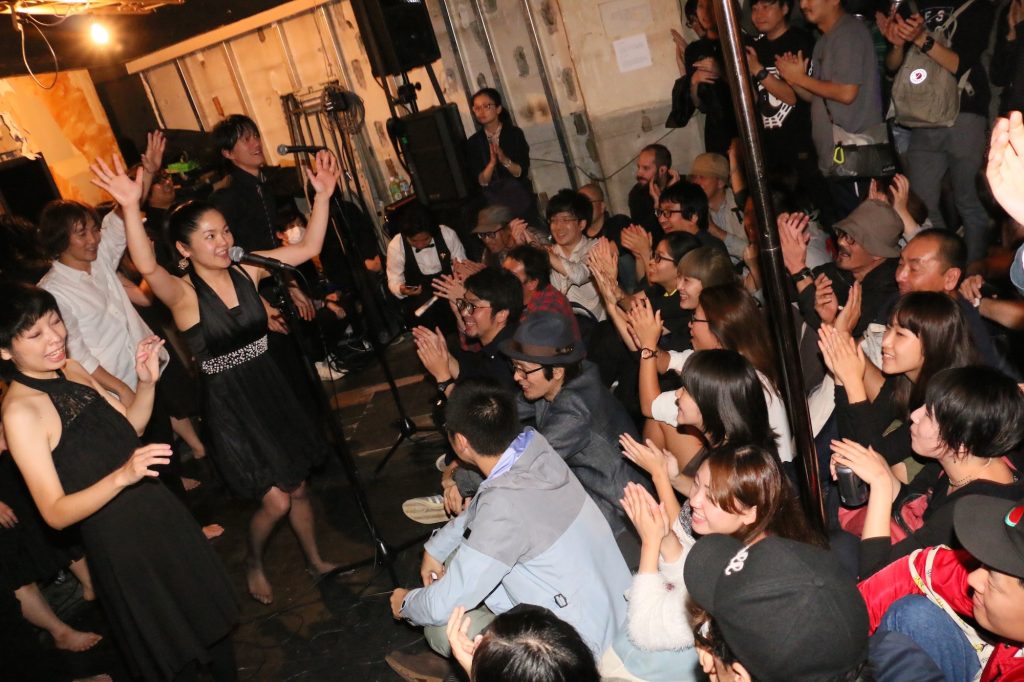 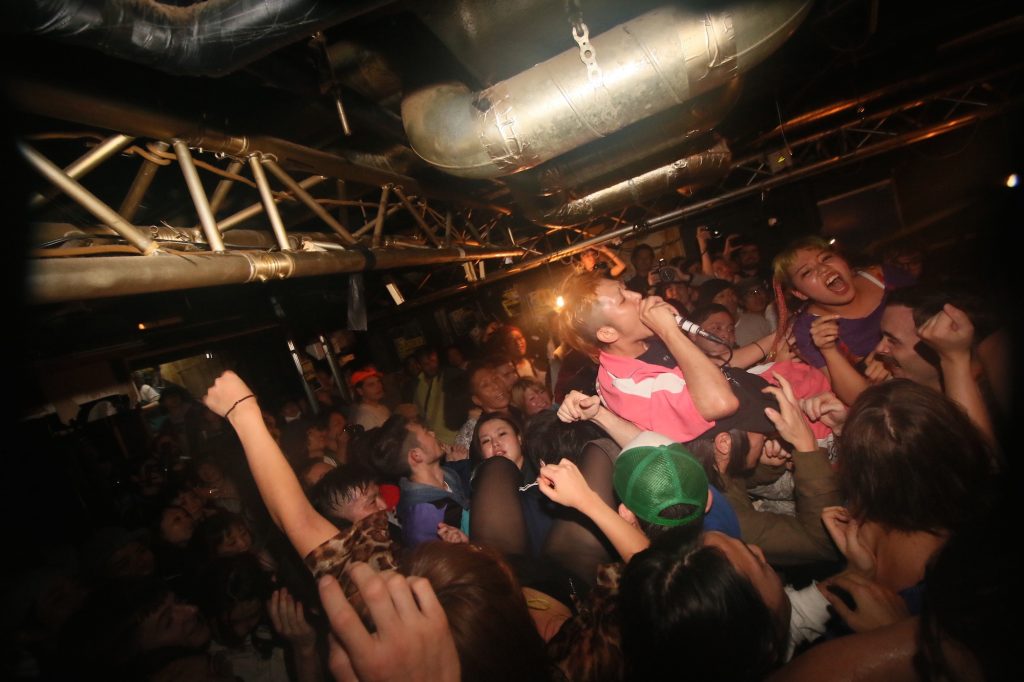 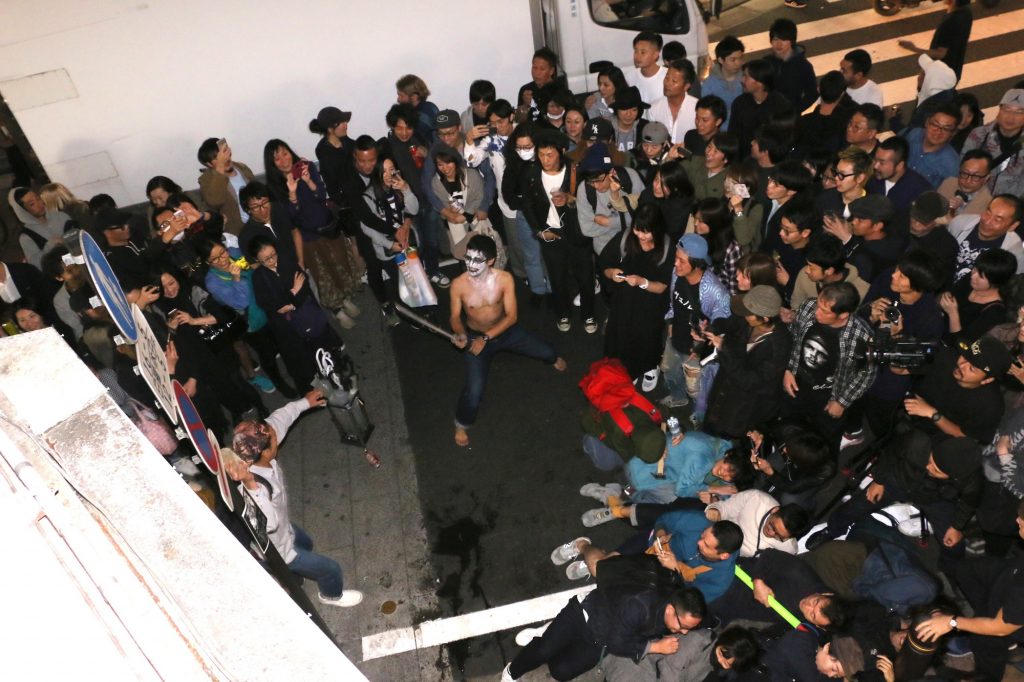 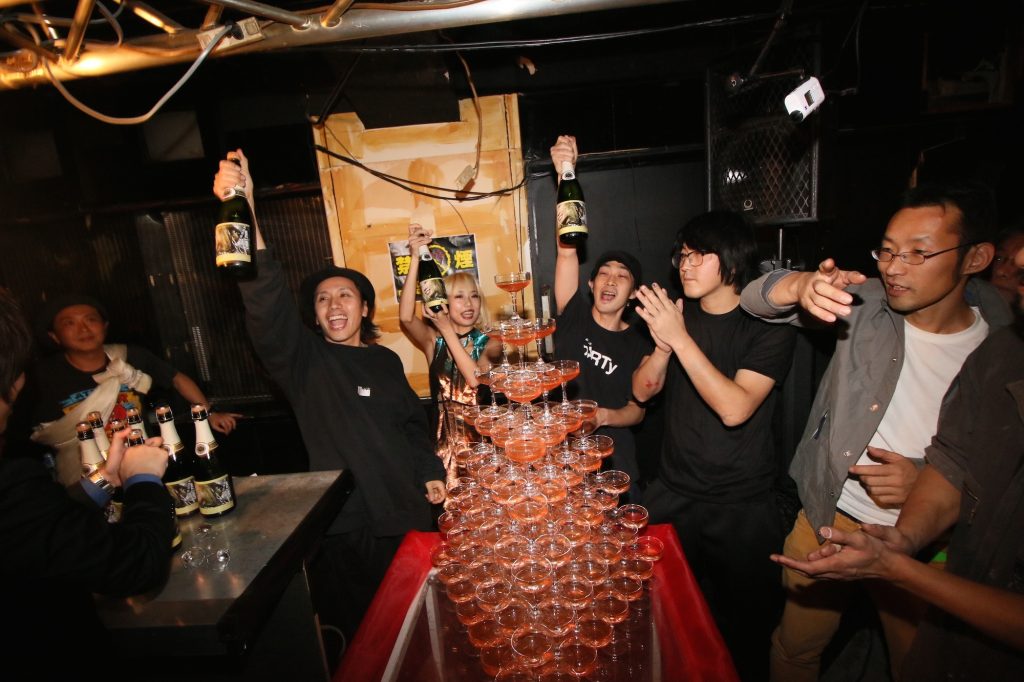 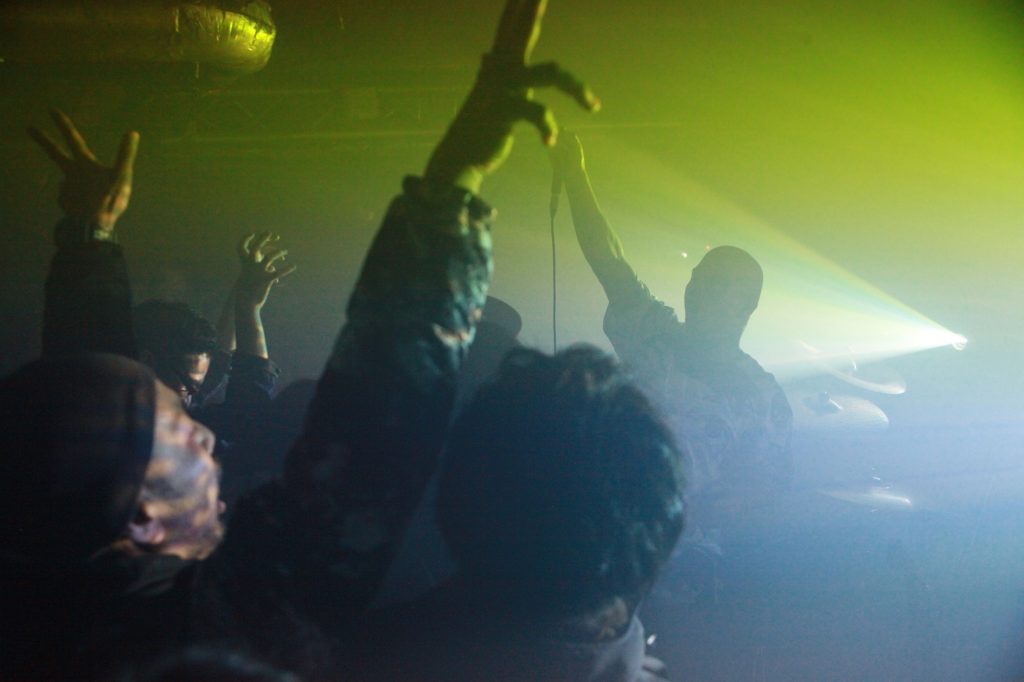 "Scrap and Build" Chim↑Pom’s artworks will not be removed even after the show ends, meaning that this exhibition will be completely destroyed along with the building. Then Chim↑Pom will collect the fragments of artwork- turned-debris that will share the same fate as the building, and reconstruct them. Adding the “C” and “P” neon signs preserved from Shibuya’s iconic fashion mall PARCO, which will also be demolished, they will show the second iteration of this project at their artist-run-space Garter in Kitakore Building early next year. In collaboration with architect Takashi Suo, they will also DIY renovate Kitakore Building, a shack-like space that has existed since before WWII, for the exhibition.

Tokyo’s landscape has drastically started to change in the past few years. While Kabukicho is launching a district- wide reconstruction, Shibuya’s PARCO and Tokyo’s oldest station Harajuku are undergoing renovations, not to mention the constant construction taking place in Shinjuku and Shibuya Station. Coupled with anti-earthquake procedures taken after March 11th, the Tokyo Metropolitan Government has rolled out a major remodeling plan for the city.
The cliché of “rebuilding the city by the 2020 Tokyo Olympics” is being touted as the pretext for everything, aside from just supporting the athletes. In fact, the National Stadium reconstruction issue symbolized this tendency.
Why does it have to be by the Olympics in the first place? Some express concern over recovery efforts in the Fukushima area stalling due to the expected construction rush requiring more workers. However, the government has been appealing to the international community on the significance of the Olympics by calling it “The Recovery Olympics.” Looking back, the 1964 Tokyo Olympics was one of the big turning points for the post-war ruins to develop into the present city of Tokyo. The Olympics presented a vision for Japan, which was still a developing country at the time, to grow into an economic powerhouse through infrastructural and urban development. This exhibition venue, the Kabukicho Promotion Association Building, was also built in 1964 just 5 months before the Olympics.
After suffering a long recession, Japan was recently hit by the Great Tohoku Earthquake. People are trying to superimpose the situation back then onto the 2020 Tokyo Olympics. “People from all over the world will visit...,” “Our economy will improve...” Many positive mantras are reproduced with an ambiguous sense of hope.
What is recovery? What is a city? Was the future of the 21st century meant to repeat a 20th-century vision? Japan has historically continued to “scrap and build” while facing many disasters, and its people have lived alongside this changing cityscape. Through an exhibition itself that experiences a “scrap and build,” we question Japanese people’s method of drawing a blueprint.