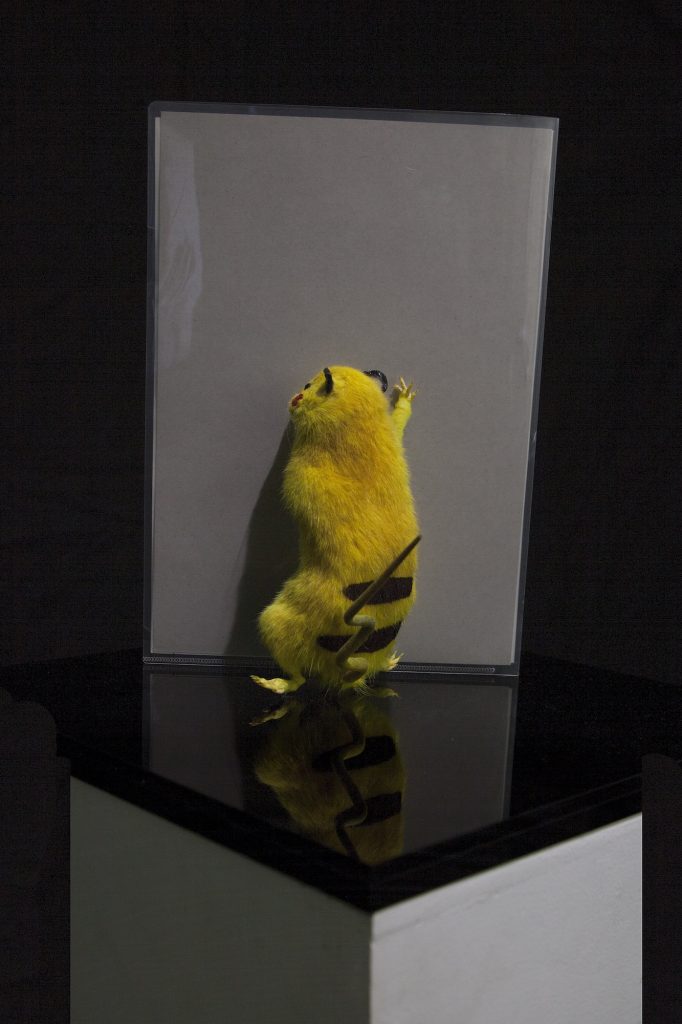 Enduring the Unendurable SUPER RAT, 2015, There had been bitter experiences of seeing this work being banned from exhibitions and magazine publications many times. Once in January 2015, the Singaporean government declined to grant permission to exhibit animals in spite of the curator’s request to do so. Immediately after SUPER RAT was featured on a magazine at the time of our debut exhibition, Shogakukan sent us a document to certify its contents. It said “The taxidermies are not to be published in any advertisements or publications,” “The taxidermies are not to be sold,” and so on. For example, we gave up the idea to publish pictures from SUPER RAT on magazine covers a number of times because we were afraid that it could be regarded as an advertisement as it would be published in mass media. Recently, SUPER RAT became a cover for a number of foreign art magazines. 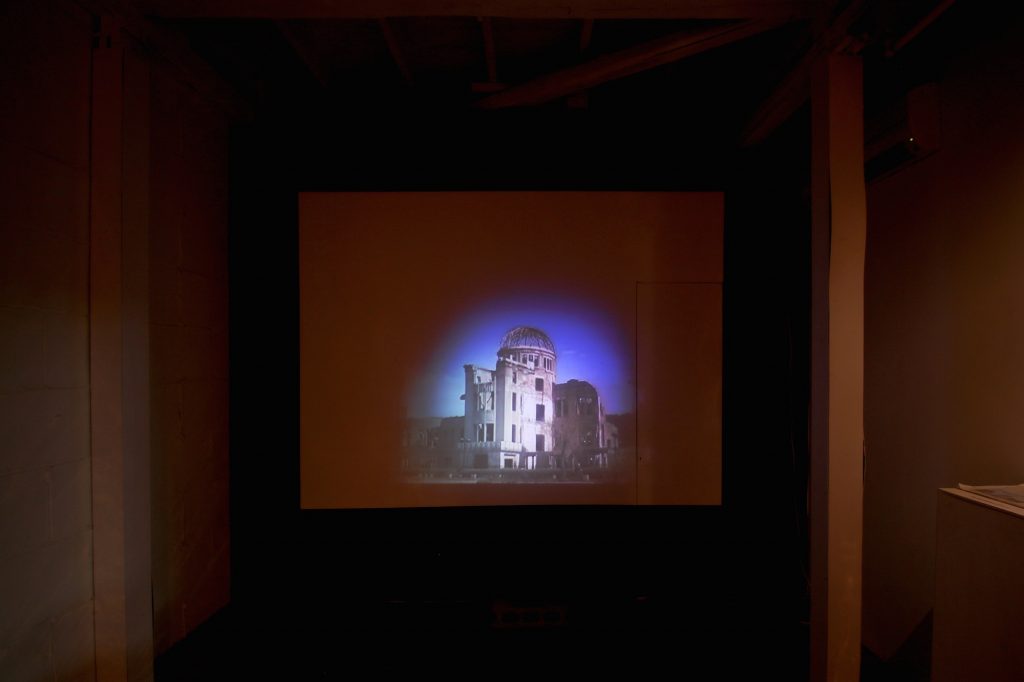 Enduring the Unendurable Making the sky of Hiroshima “PIKA!”, 2015 Produced for a solo exhibition at the Hiroshima City Museum of Contemporary Art, the museum requested for the show to be cancelled after it generated public controversy. Alongside this show, a piece of work comprising 1,000 paper cranes was also found to be cancelled - the schools of the students who made the cranes rejected to provide the materials. Chim↑Pom thought of a very conceptual situation that even if there is no artwork, a certain number of people might still come to see the show. Nevertheless, they agreed to cancel the exhibition as they would not be able to show their true intentions. Following this incident, the work has been shown 5 times, including an independently-curated show in Harajuku and an exhibition at the Former Bank of Japan Hiroshima Branch in 2013. From then on, Chim↑Pom adopted this unrestricted and independent way of organizing exhibitions as their usual practice. 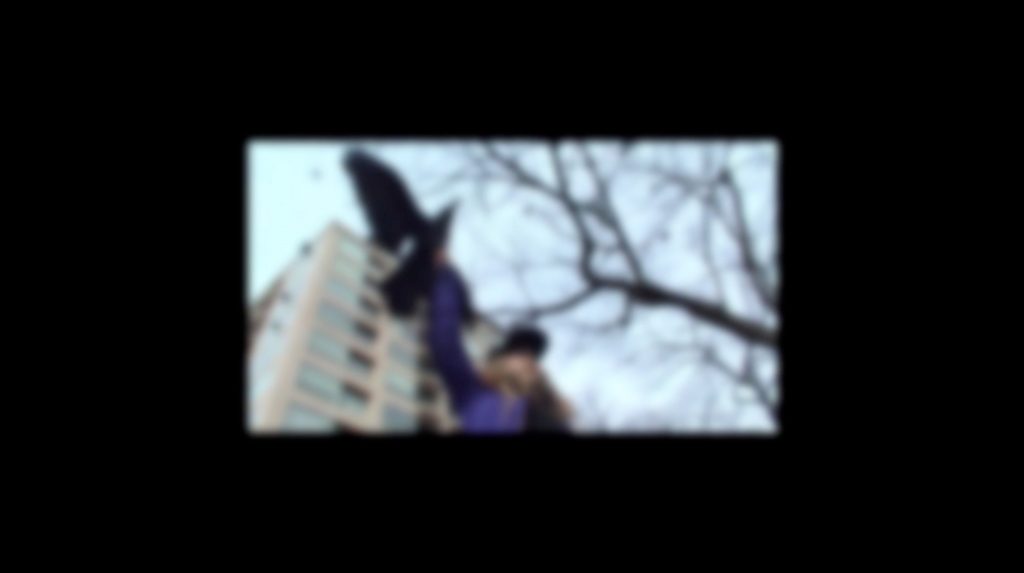 Enduring the Unendurable BLACK OF DEATH, 2015, This work has been acquired by the Museum of Contemporary Art Tokyo and exhibited as the part of MOT collection. However, to have this work acquired and exhibited we needed to fulfill the request to cut out the scene where crows gather above “Nabetsune House,” which is the apartment of Tsuneo Watanabe, chairman of Yomiuri Shimbun Group. Initially, we refused because we suspected a deep relationship between the Yomiuri conglomerate and the MOT through exhibitions such as Studio Ghibli to be part of a deal. However, Chim↑Pom did not intend to offend any individual person and cutting the particular scene did not influence the overall concept of the work. More than anything it was a hassle, so Chim↑Pom agreed on cutting the scene for now and putting it back when the time comes (meaning, after his death). In this version, “death” unintentionally affected this work and it exactly embodies “BLACK OF DEATH.” 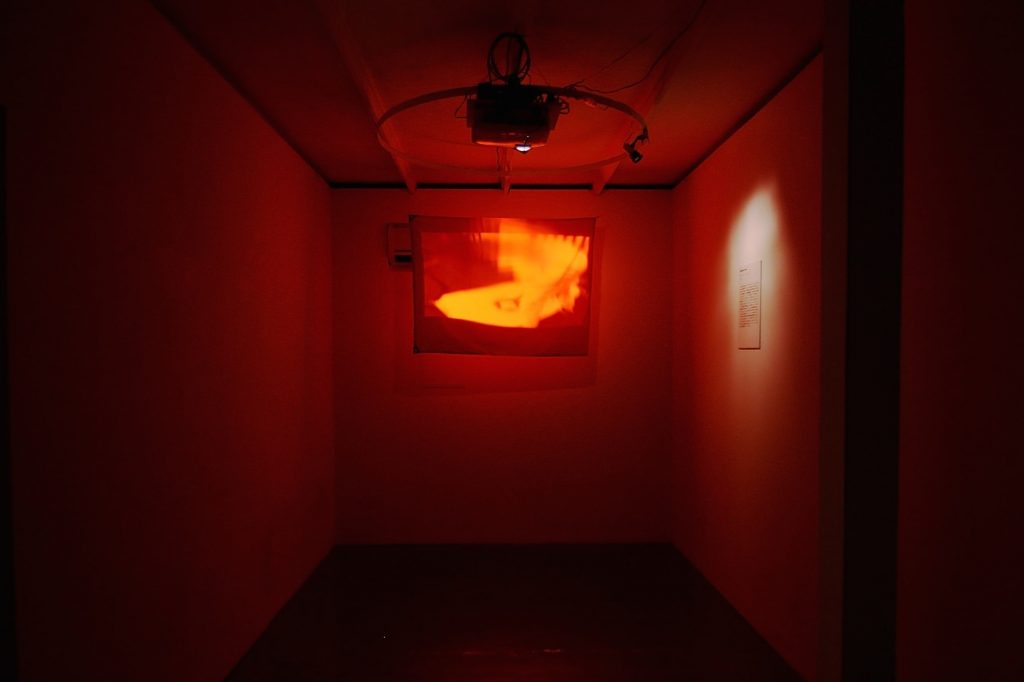 Enduring the Unendurable REAL TIMES, 2015, Even though we received a request from the curator to exhibit REAL TIMES at the Shanghai Biennale in 2012, Chim↑Pom was required to change the exhibiting work at the very last minute. The reason was due to the Senkaku islands dispute, which was intensifying at the time. The problem with the work was the appearance of the Rising Sun flag that one of the members then transformed into a nuclear mark with spray paint, made near the nuclear power plant in Fukushima. This was a rare complaint as this work is often seen to criticize Japan. Massive street demonstrations were happening in Shanghai just before the biennale, and the number of Japanese tourists dropped significantly. Certainly it was a dangerous time. By the way, this work was made into a version to be projected on a red flag in order to neutralize the red circle in the center of the Japanese flag. 2012年の上海ビエンナーレの際、キュレーターから《REAL TIMES》の展示をリクエストされたが、直前になって展示作品の変更を要請される。当時激化していた尖閣諸島問題が原因だった。メンバーが原発の近くで旗に改変していくマークをスプレーで描くのだが、いちど日の丸になっているのが問題とのこと。日本Disと受け取られがちな本作にしてはめずらしいタイプのクレームだった。ビエンナーレ直前にも上海で大規模な反日デモが起き、日本人観光客も激減していたときだった。つまり、確かに危ない時期ではあった。ちなみに本作品は、赤い旗にプロジェクションをして、日の丸の赤を相殺するバージョンである。

Enduring the Unendurable KI-AI 100, 2015, Although this work has been shown in 20 countries, one of the organizers, the Japan Foundation, rejected to show it when a curator offered us exhibiting it at a biennale in one country. Chim↑Pom apologizes for disclosing “off-the-record” information that the staff shared with them, but the reasons were something along the lines like “Since the Abe Administration began, the government strictly checks business that goes overseas. There are no official notifications, but there are forbidden words, like radioactive, Fukushima, Comfort woman, North Korea etc., and if we use those words, someone from departments close to the Prime Minister will directly send us complaints.” Finally Chim↑Pom agreed to exhibit some other work. This work is made according to the suggested version. It felt like an echo of pre-war times when one of staff told us disappointedly, “We can do nothing but to accept it.”
Enduring the Unendurable (2015)

Chim↑Pom’s 10th anniversary exhibition held at Garter Gallery. This exhibition reveals five cases of different compromises they made during their 10 years of practice, from censorship imposed by public institutions, exertion of control coming from exhibition sponsors or curators, to self-censorship, which were all intensified from around 2011. While quoting a passage from Emperor Showa’s regrettable announcement of the surrender of Imperial Japan in the Second World War, “Enduring the unendurable and suffering what is insufferable.” Chim↑Pom reflected upon their dark past with works of art that were forced to change due to restriction orders.

In greeting the 10th Anniversary, It was literally and seriously wonderful days for us to do art. However, it was also the worst and freaking 10 years as giving in to censorship by art museums and organs. Recent years, those kinds of issues are getting to circulate. However, they shift the problems to personal qualities of artists and curators, and art museums are simplied as power that is easily criticized like scandals in TV shows … etc. What we want to say is they are sticking to stupid discussions over the “freedom of expression” in the twentieth century without focusing on social issues which are rich in variety that are supposed to have referred to each controversial works. ose problems aren't new now, but actually it has been secretly repeated within the freaking outrageous convention of freaking censorship and negotiations, which have been passed below the surface in commonsense. ose responsibilities are not only within organizers who are in freaking situation that they have no choice but to tell the requests but also within all freaking artists who have accepted them. As a fact, those art curators and organizers are mostly nice, so it really bothers me to hold low-level negotiations with those people. I might as well have said “I’ m gonna think alternative idea” and escape into the fresh air outside rather than breathing in the serious annoying atmosphere of the long awkward meetings and shortening each other's lives. In greeting the 10th Anniversary, we look back over the dark history accumulated over the years and Chim↑Pom feels really sorry against art again. We would like to look back those freaking dark past in commemoration of the 10th anniversary, which we spent facing the atmosphere since we formed, furthermore the intervention for art of the present regime that is getting seriously harsh and very specic, and also enduring the unendurable and suering what is insuerable, the freaking 70 years going on behind since the end of World War II. By the way, 5 cases that are shown in this exhibition are the tip of the iceberg as even Chim↑Pom, and in terms of the whole art scene in Japan, an enormous retrospective exhibition of Japanese art will be awaiting ahead of the expansion of this exhibition. Dear the Japanese art scene which has supported us, thank you so much. And dear organizations that can’ t move on, I would say on this occasion, good bye.