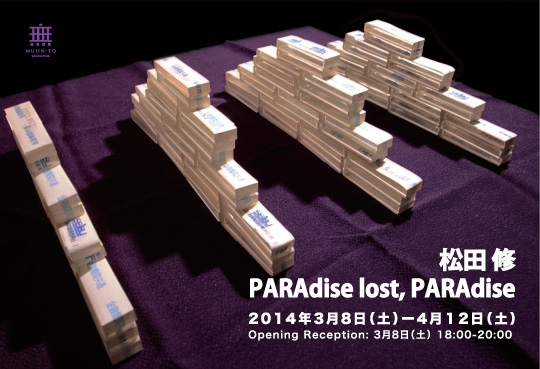 Taking many different methodologies such as video, sculpture or drawings, Osamu Matsuda attempts to tackle the universal themes in everyday genre scenes, for instance, life and death. Occasionally depicting the virtuality in modern society, where wars or deaths are continuously reproduced in computer games, Matsuda scoops out those who are neglected from society like heavy shut-ins or the so called NEETs(acronym of Not in Education, Employment or Training).

In his last solo exhibition, “Nikoichi!” in 2012, Matsuda had developed his unique execution method where he takes two objects and make it into a single piece, originally inspired by repairing techniques. Taking materials like broken car, taxidermied animal legs or waste oil, Matsuda presents an alternative form of resurrection and hope combining totally different objects that were already consumed or even destroyed. His attempt to reveal the fundamental duality of creation and destruction may be appear as lowbrow, but, in fact, it is an way of giving birth to a new, positive sacredness.

While “Nikoichi!” was constructed on the notion of “ + (plus),” this time, “PARAdise lost, PARAdise,” has its basis on the “ – (minus)” representation as the key phrase throughout the whole exhibition.
Born in 1979, Matsuda’s generation was later named as the “lost generation.” Witnessing the inevitable gap between what they were taught at school and what was really happening, the whole generation was struck with the fact that the former way of living can no longer sustain and confronted a huge generational conflict while not knowing what they have actually lost. They may have the sense of resignation in the bottom of their hearts, on the other hand, it can be described as a generation that were forced to nurture their own way of life. This is where Matsuda sees the distinctive culture and potential in the lost generation and utilizes as the ingredients of his work of art.

The exhibition features Matsuda’s works that appears to be seemingly unhealthy, yet, highly entertaining and musical installations. “Unmanned Wall-hitting Machine ‘Muji Don Kun’”(2014) is an auto-playing instrument that renders wall-banging or floor-banging ーan act of communication to other family members or to express uncomfortableness to others, typically done by heavy shut-insー into a form of music. Another work frosm the show, “Alone In The Blue 3”(2014), is a video piece that plays the music from the film “Forbidden Games” with the sound of motorcycle engines without silencers. These are suggestions of how to be isolated from a group but still happily enjoy solitude with your own ruled games, presenting a dynamic change of the viewers perceptions.

One of the main work, “Zero Hundred Million Yen”(2014), is made with cash bundles which is enough to sum up to one hundred million yen, not only represents the fact that Matsuda is broke, but simply shows the presence rather with the absence of actual money. It contains multiple ironical aspects towards other people, society and the artist Matsuda himself centering the sense of loss as its catalyst.

Referring to the exhibition title “PARAdise lost, PARAdise,” Matsuda says “I always wanted to think this way: Adam and Eve had been expelled from the garden of eden by God, but somehow figured out that this world was also a paradise,” describing paradise and paradise-lost as equilvalent concepts. The belief that where they, the lost generations, stand is also a paradise, made Matsuda name the exhibition this title, in short colloquial form “PARA-PARA.” This poppish title creates peculiar contrast with the deep and cynical atmosphere of the exhibition, exposing how Matsuda passionately sees loosen up future wrapped in a cover of black humor.

Please come see how Matsuda interprets paradise, and once again comprehend this stagnation era with bizarreness and laughter.