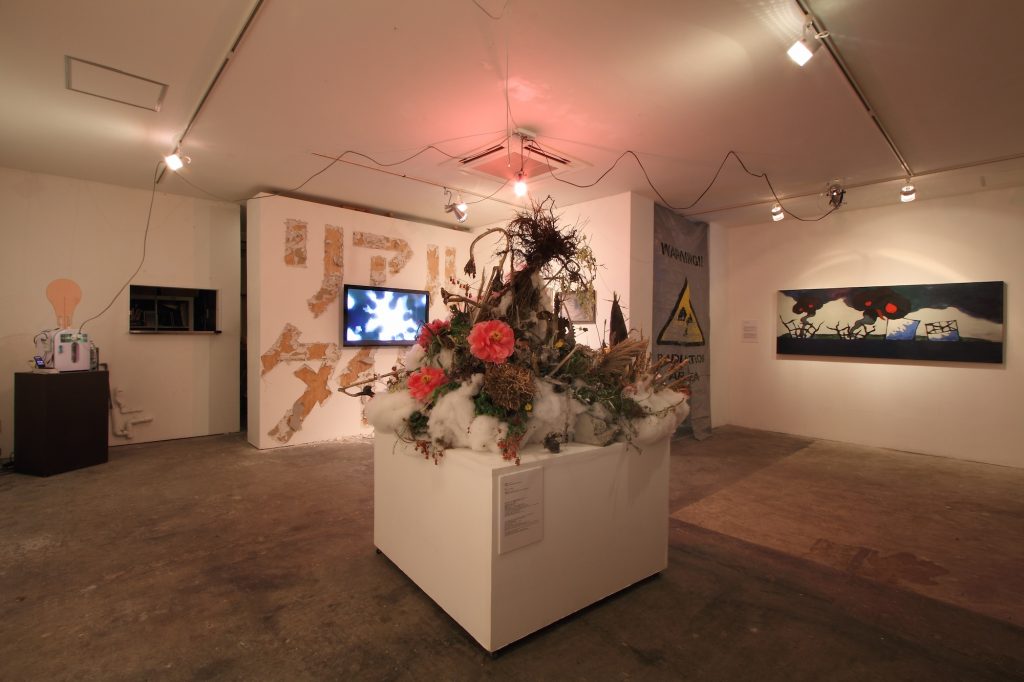 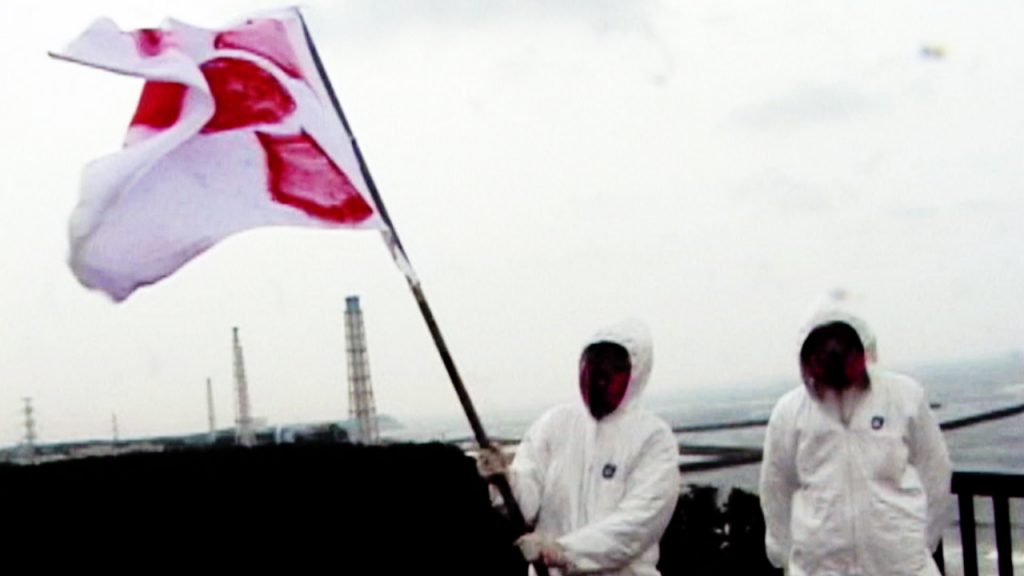 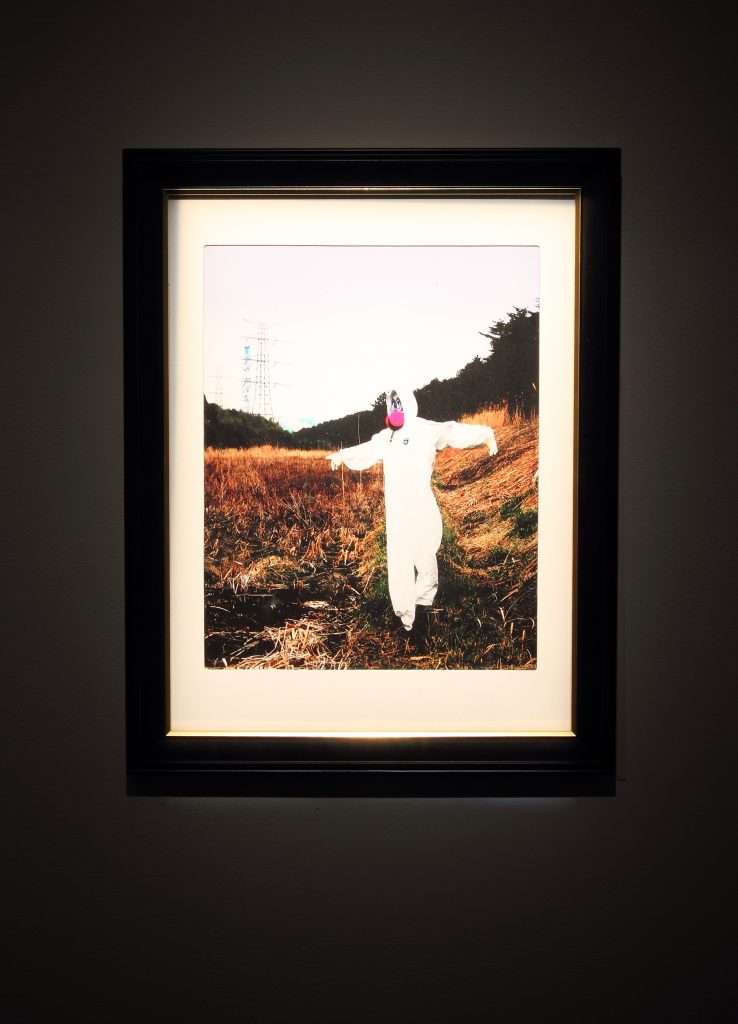 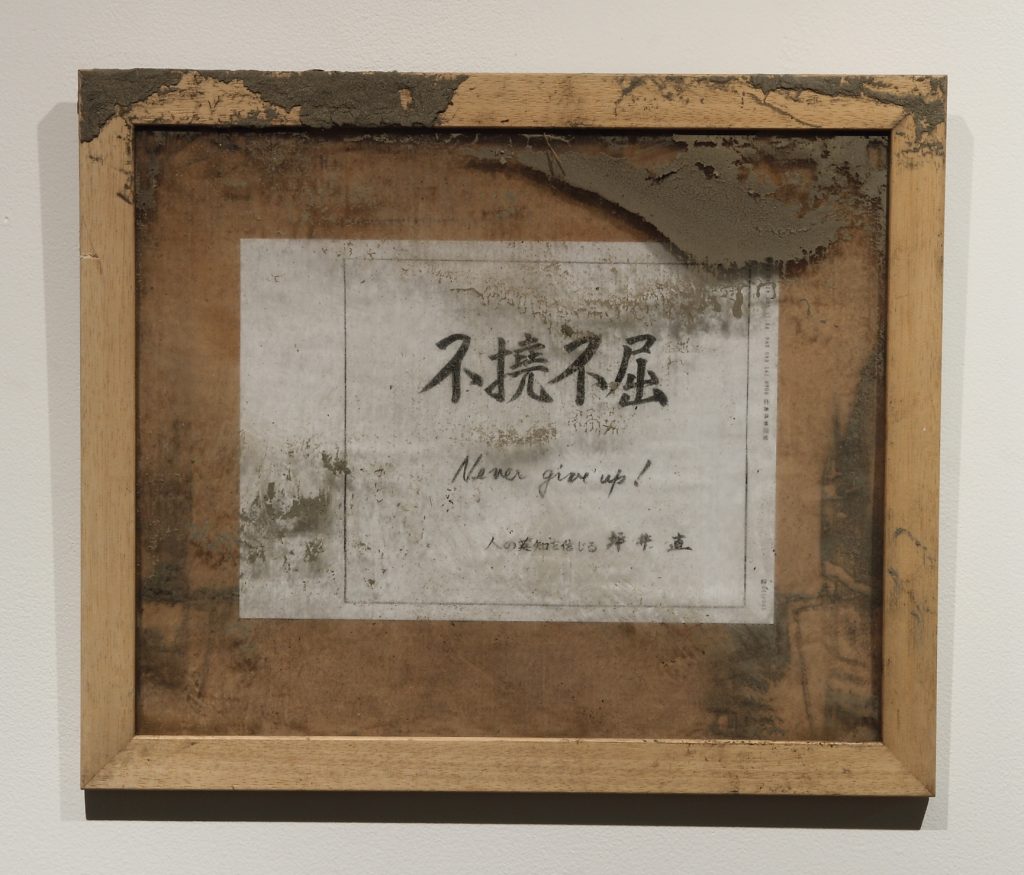 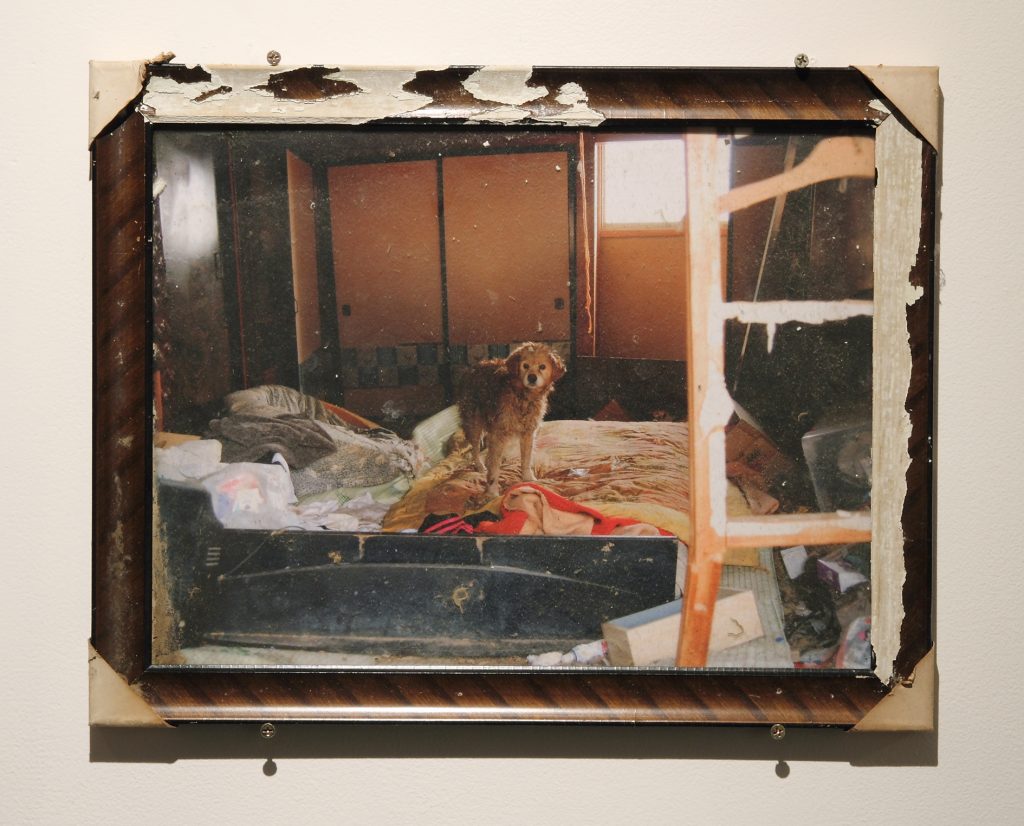 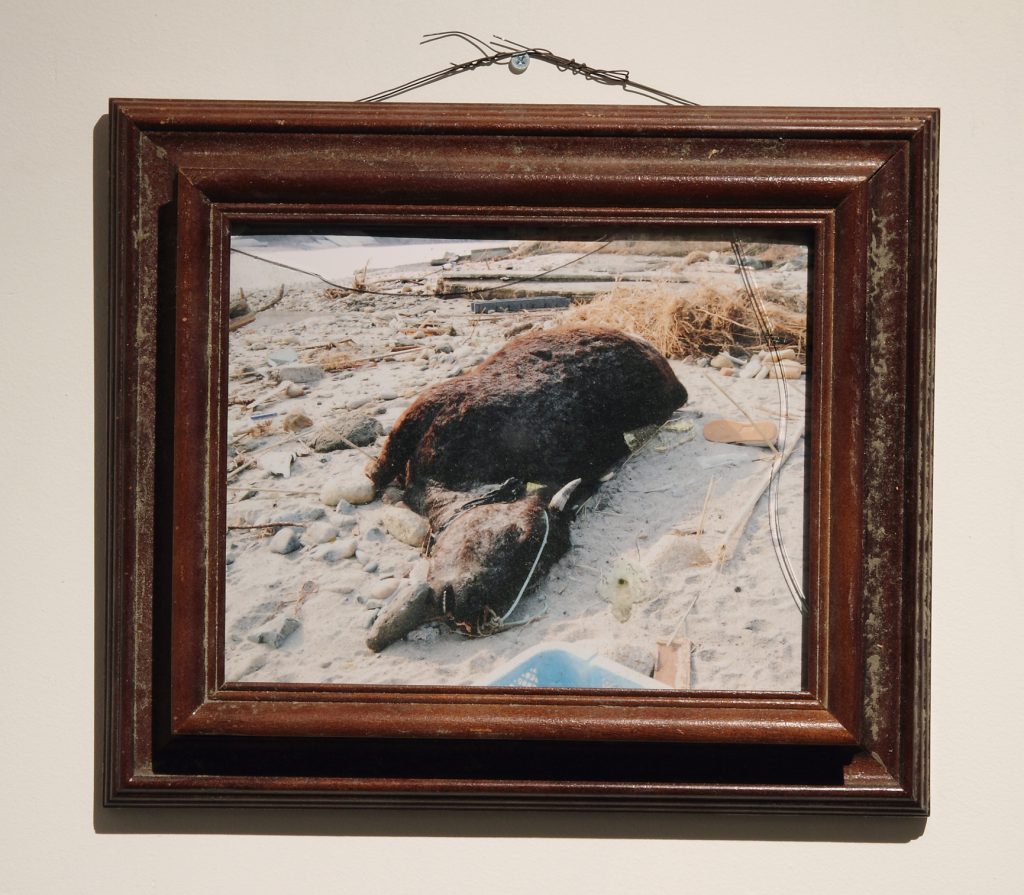 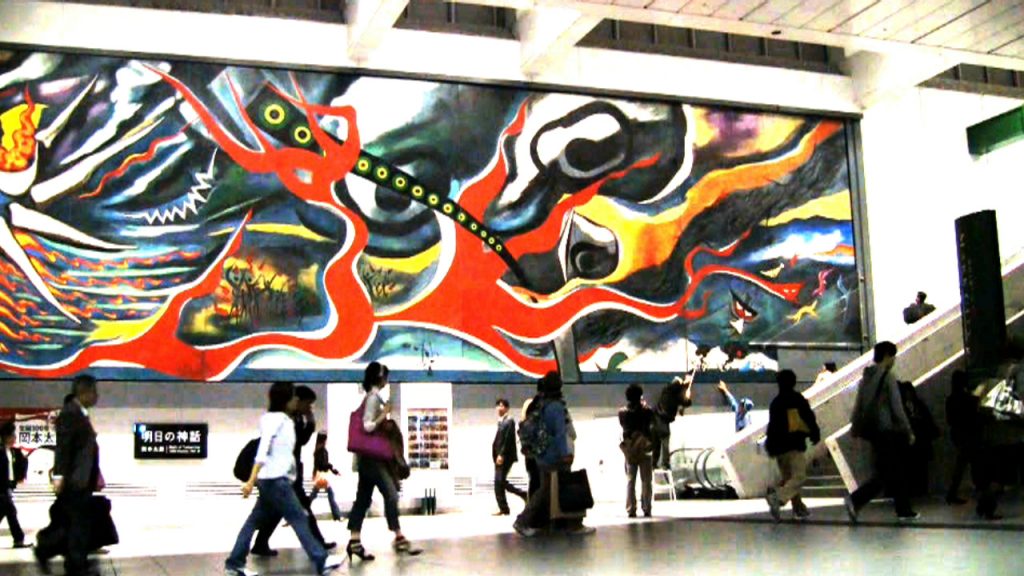 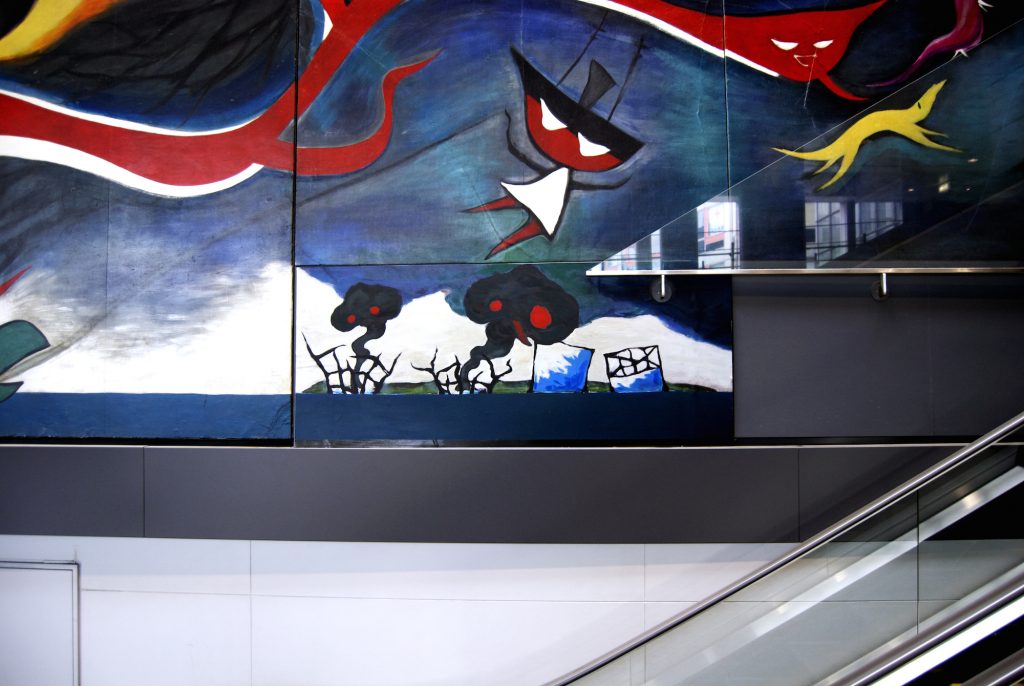 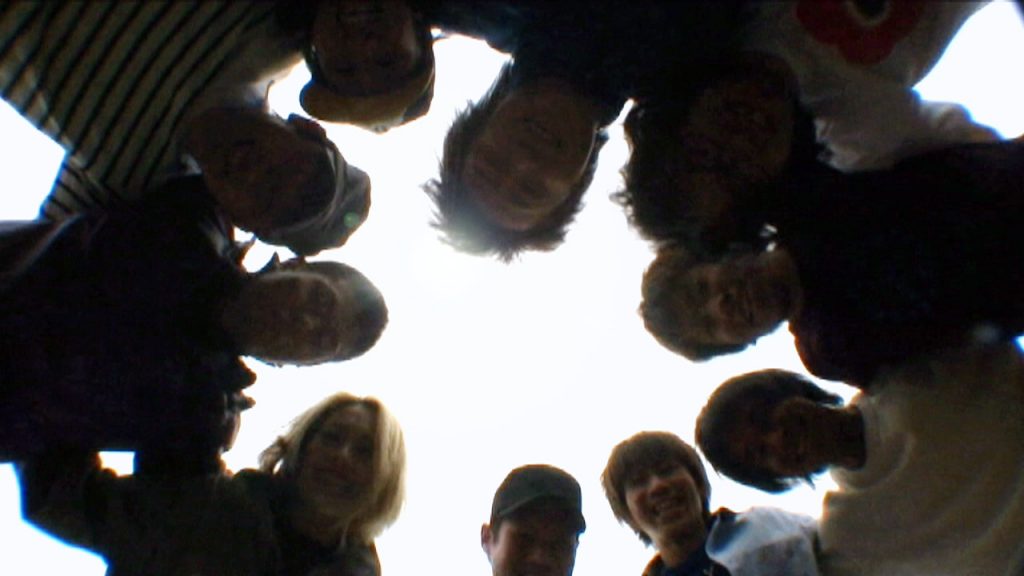 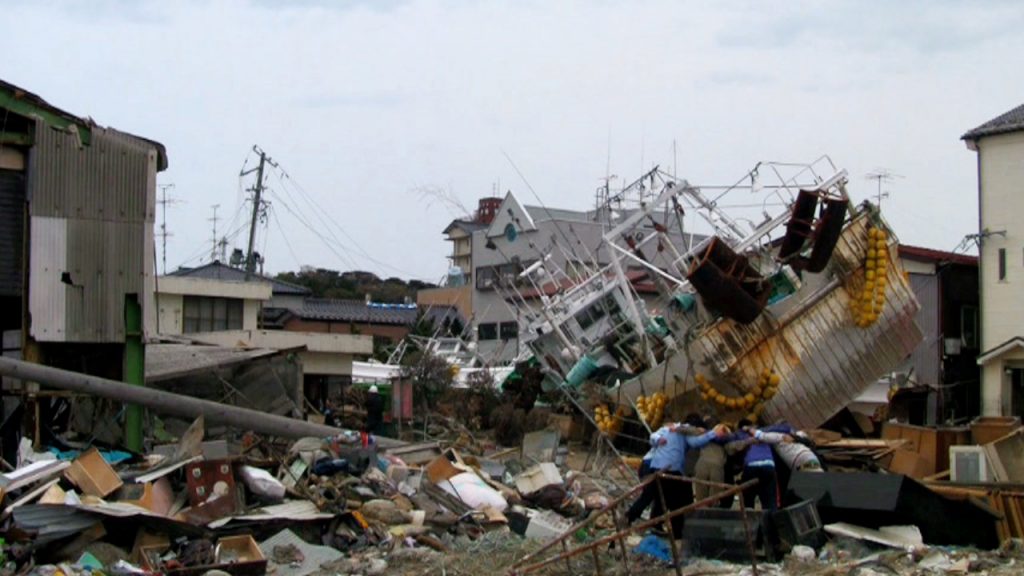 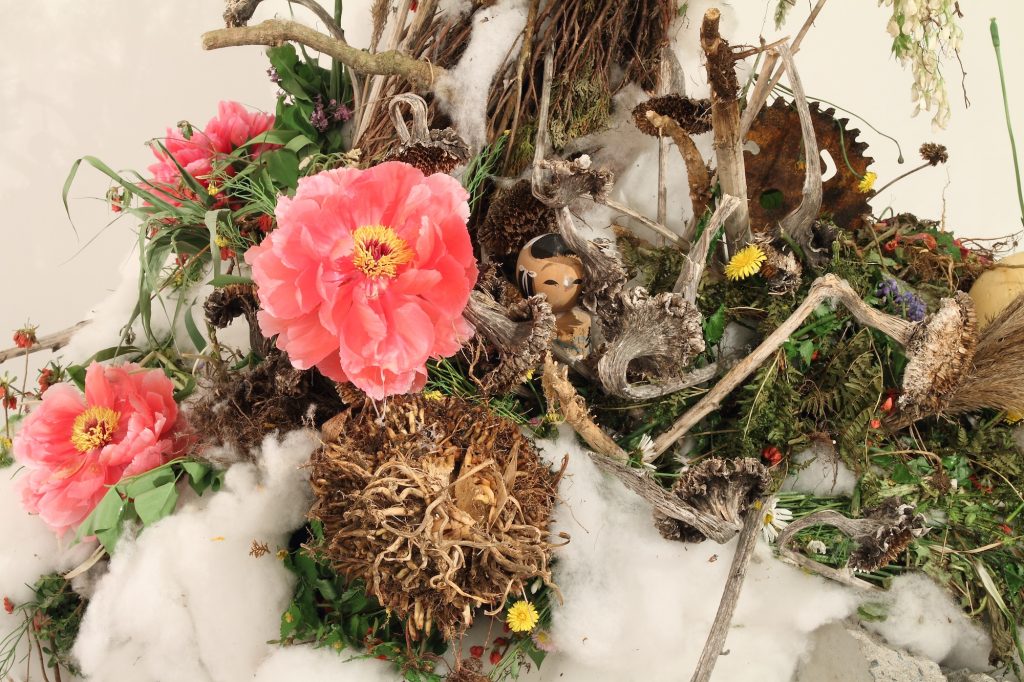 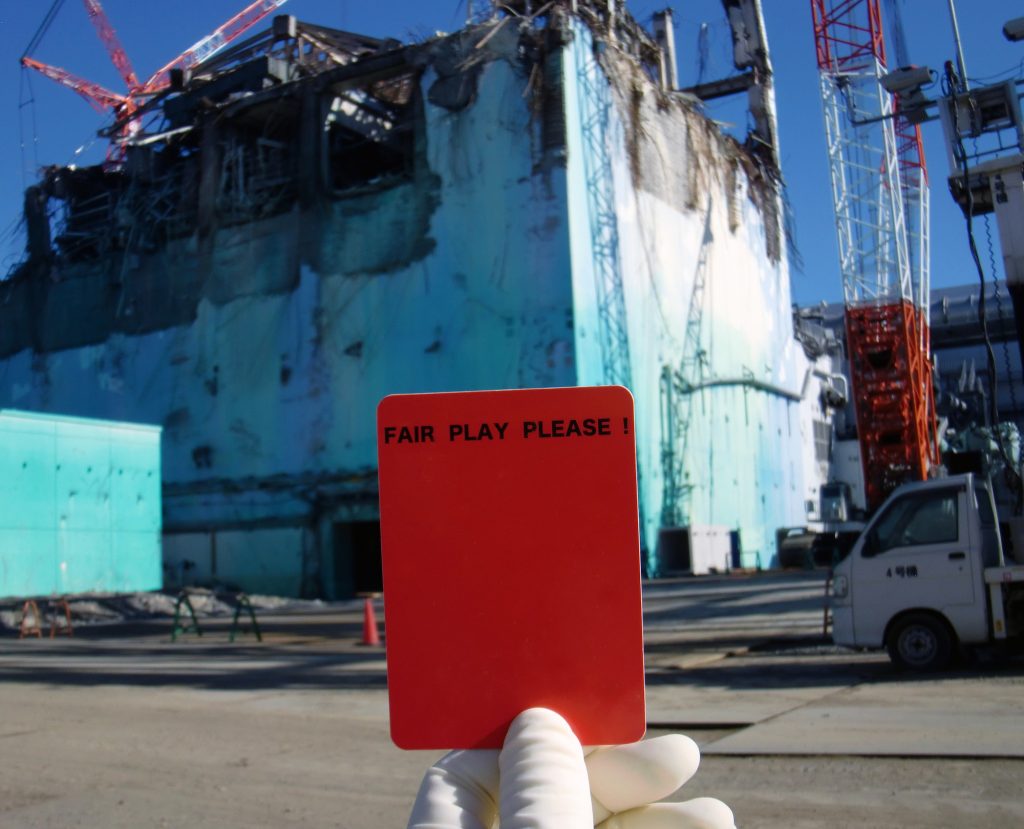 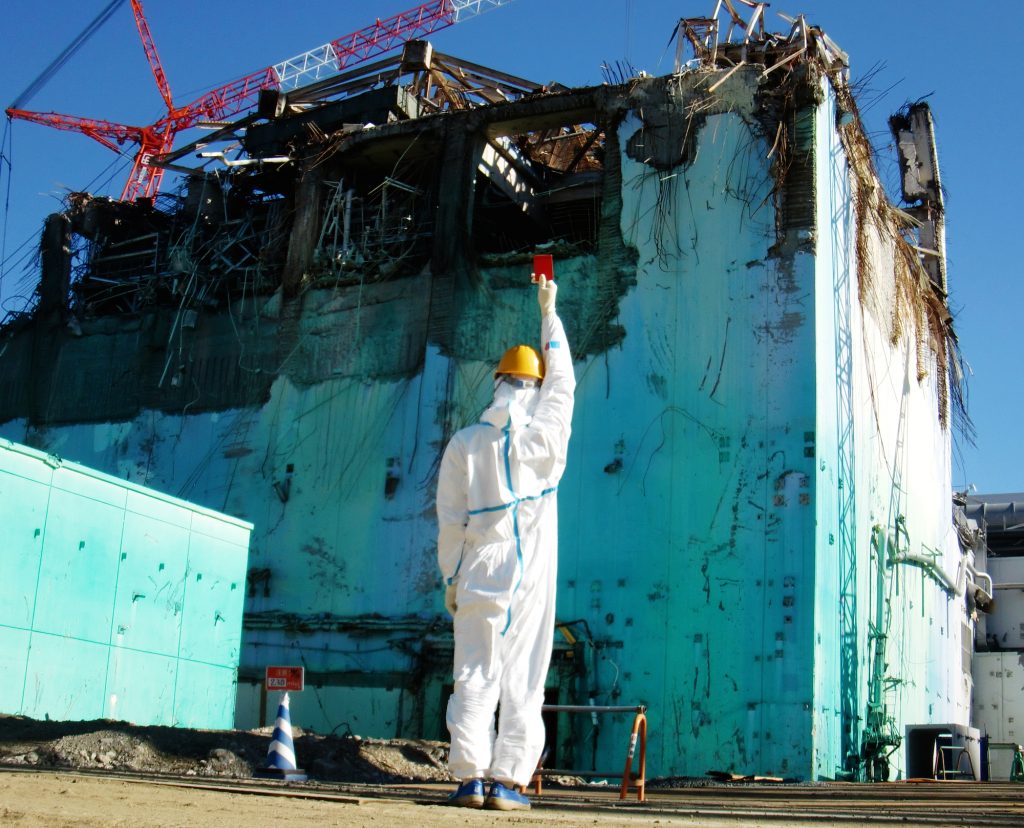 REAL TIMES is a series of works produced in response to the Great East Japan Earthquake on March 11, 2011, and the following accident at the Fukushima Daiichi nuclear power plant. Facing such overwhelmingly gigantic events in reality, people unanimously of powerlessness of art here and there while a number of exhibitions were cancelled as something impolite, against which ChimPom departed to the accident site to produce works. Chim↑Pom also triggered a social phenomenon after posting a panel depicting the nuclear power plant accident next to "Myth of Tomorrow" by Taro Okamoto, a huge mural permanently installed in Shibuya station and seen as a chronicle of nuclear exposure experiences of Japan. "REAL TIMES" exhibition was held independently in May with these works and eventually reported in many countries as the representative response to the quake and nuclear accident in Japan.

"REAL TIMES"
On April 11, just a month after the 3.11 incident, Chim↑Pom trespassed in the hazardous areas of towns that became uninhibited as a result of the nuclear accidents, heading for a lookout point on the site of the TEPCO (Tokyo Electric Power Company) facility, approximately 700 meters from the Fukushima Daiichi Nuclear Power Plant. TEPCO had estimated radiation levels to be 199μSv/hr. Having parked their car near the main gate, Chim↑Pom made a 20 minute trek to reach their destination. From the top of the lookout – which was previously promoted as a site for spectulating the New Year’s sunrise – was the view of white smoke rising from Reactor 4, and the Pacific Ocean, of which a vast amount of contaminated water was leaking into. Chim↑Pom stretched out a white fag, sprayed a red circle on it to resemble the red circle of the Japanese fag, changed it further to a radiation symbol, and raised the fag following the custom of “the pole of inaccessibility” like on the moon or Mt. Everest. The title REAL TIMES has three meanings; as this very moment “right now,” as a “real era” like the film title Modern Times, and as a media title of newspapers like The New York Times, in claim against the situation in which the reality inside these hazardous areas were never reported through mass media.

"without SAY GOODBYE"
Chim↑Pom installed and took a picture of a scarecrow wearing a protective suit and gas mask in a totally abandoned farm close to the Fukushima Daiichi Nuclear Power Station, as homage to evacuated locals and workers at the nuclear power station. It was framed in a funeral photo frame.

"Never Give Up"
Using a frame that survived the Great East Japan Earthquake, Chim↑Pom framed a piece of fax paper sent from Sunao Tsuboi, who is a representative of an A-bomb victim organization in Hiroshima. For over 50 years, this has been the motto Tsuboi used in speeches and public occasions. As an A-bomb survivor living in Hiroshima who endured the devastation and radiation Tsuboi has struggled against his disease and called for the total abolition of nuclear weapons as a theme for all human beings, even though it might only be accomplished after his death. Tis motto is enormously significant to 21st century Japan.

"Japanese Dog"
There was a dog with a collar in front of a collapsed house from the 2011 Tohoku earthquake and tsunami, which growled and stared at us. It started walking towards the house but immediately stopped and looked back at us. Looking at us in the eye, the dog started to walk to the house again. We kept following the dog, and ended up finding another injured dog on the second floor. We noticed a bowl nearby. Seemingly the dogs were being fed. We put some water and canned tuna in it, and the injured dog tried to wriggle and come closer. As expected, it was starving and ate everything up in a moment. It then wriggled back to its bed.


"Level 7 feat.'Myth of Tomorrow'"
The huge mural Myth of Tomorrow by Taro Okamoto in Shibuya station is a chronicle of the nuclear exposure of Japan. Witnessing the atomic bombing in Hiroshima and Nagasaki and the hydrogen bomb exposure of the Lucky Dragon 5, radiation has traveled through the 20th century and to the present day over centuries, from war to peace, together with the safety myth of the nuclear power plant. Myth of Tomorrow was completed in an unnatural form due to the shape of a hotel where the work was originally located. In the mural, the Pacific Ocean, with the Lucky Dragon 5 being exposed to nuclear ash, spans its horizon from under the central figure of a burning man to the lower bottom, where the horizon is interrupted with a blank space.The margin was left as an ordinary wall, providing a prophetic blank to the 21st century. In 2011, reality updated this chronicle. Chim↑Pom added the figure of the explosion at the Fukushima Daiichi Nuclear Power Station to the blank, as a figure “unexecuted” by Taro Okamoto himself and as the reality of all the Japanese people living after Hiroshima. LEVEL 7 feat. “Myth of Tomorrow” will always be together with Myth of Tomorrow forever. To see the work through its absence must require our imagination instead of eyes, just as to conceive of history or radiation We believe imagination is the very possibility for ground zero, and the most fundamental power to create the future. And we believe art exists as such.

"KI-AI 100"
This video work features Chim↑Pom members with friends in Soma City, Fukushima. They gathered in May 2011 and did 100 sequential yells of “KI-AI” which is the Japanese word for shouts that show a fighting spirit in martial arts. As one of the affected areas of the Great East Japan Earthquake, Soma City locals spent over two months in the destroyed city under fear of radiation. They lost their loved ones and their homes. Unlike other areas that were intensively covered by mass media, and also due its proximity to the Fukushima Daiichi Nuclear Power Station, Soma City suffered from a shortage of volunteers. These were real shouts filmed all in one-cut and ad-libbed, by young locals who, although being victims themselves, had continued to provide relief and help towards reconstruction.

"Radiation-Exposed Flowers Harmony"
In collaboration with flower artist Junichi Kakizaki, this ikebana [the Japanese art of flower arrangement] is made out of plants found around the 30-kilometer radius surrounding the Fukushima Daiichi Nuclear Power Station. Plants cannot run away like animals do. What kind of effect will radiation have on plants: Will they suffer? Does the beauty of the flower differ if something were to happen to them? Te plants remain in the hazardous zone yet do nothing but continue to grow. They might rather bloom massively in the uninhibited zone after all, as the art of ikebana is to nurture the plants vitality beyond human understanding, keeping them alive by cutting them up. Te mighty way in which plants survive does not only represent the healing of human beings with self inflicted wounds, but rather there exists certain beauty while they carry out their destiny. They say the origin of ikebana comes from flower offering. Tis piece is dedicated to all lives that confront adversities.

"Red Card"
Toshinori Mizuno worked at the Fukushima Daiichi Nuclear Power Station for two months from October 2011. He was afraid that it might be one of the most horrible places on Earth but when he got there, he found that the job was the same as any other manual labor job he had done before and that the place was organized. He did his everyday job, waiting for the right time to take a photo. One day, during break time, he went over to the spot where he would take his picture. With the exploded reactor No. 3 in front of him, he felt the strength and dignity of those nameless workers as he set the self-timer on his camera.