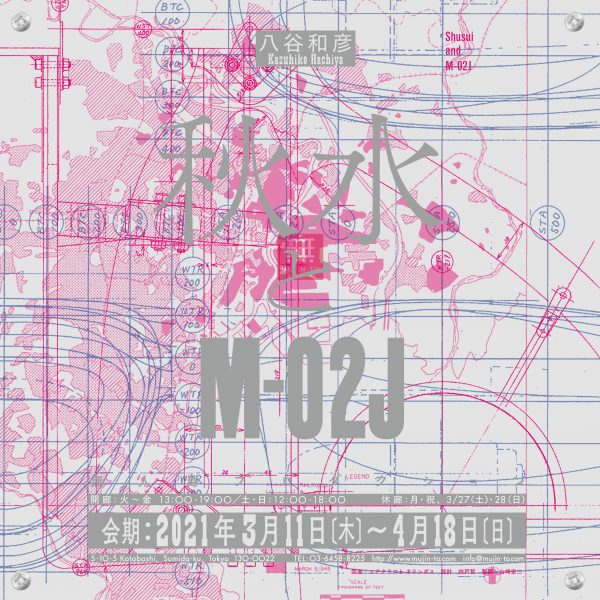 The first time in 14 years, this exhibition features “OpenSky Project” that Hachiya has been working since 2003, and exhibits M-02J, a single-seater flight device (equipped with a jet engine) produced by an individual, for the first time at MUJIN-TO Production.

The tailless aircraft, M-02J was designed with inspiration from the animated movie and comics “Nausicaa of the Valley of the Wind”, as you can imagine from the shape of the aircraft.

2003, when Hachiya started the “OpenSky” project, was the year when the Iraq War broke out. Hachiya thought on the war by overlapping the situation in which Japan participates in the Iraq War, which began under the pretext of holding weapons of mass destruction, and the situation in which the surrounding frontier nations are at the mercy of the war between the great powers and religious nations. He conceived the idea to make his own aircraft like Moeve, which Nausicaa uses while struggles to avoid the expansion of the war and to end the conflict. After spending a long time of 10 years designing and experimenting with gliders, the M-02J equipped with a jet engine succeeded in flying on its own, and the aircraft number was approved. After that, M-02J repeated flight tests, and in 2019, succeeded in the flight in the United States, which was set as an extra goal.

This exhibition evolves around the actual display of the M-02J, as well as the materials of the rocket local fighter “Shusui”, which was jointly developed by the Japanese Army and the Japanese Navy during the Pacific War.

The same tailless aircraft as M-02J, Shusui was born in wartime Japan, with the aim of intercepting the B-29 flying into the air raid. Though, Shusui made it to a test flight however, ended with only a prototype. Regarding Shusui, Hachiya said that it might have been a “singularity” among Japanese aircrafts. The Japanese aircraft industry, which entered its dawn before the war, was banned from research and operation, let alone manufacturing the aircrafts, due to Japan’s defeat at the World War II. As a result, many aircraft manufacturers in Japan were forced to switch to other industries.
Afterwards, the aircraft industry revived a little, but it was far from that of before the war. In Japan, development and production as subcontractors were the main role rather than new designs of the aircraft, and many talented engineers also sought a place to utilize their talents and crossed overseas and engaged in work in other industries.

As of 2021, the aircraft industry is “actually on the verge of extinction, like the crested ibis a while back,” says Hachiya. Shusui was manufactured as the final fighter aircraft just before the end of the war and M-02J was manufactured in the declining domestic aircraft industry are displayed side by side. By seeing these two aircraft, one may feel not only past and present but also the future that can be found in the end at the venue. At the exhibition, we’d present the interview of Mr. Satoru Shinohe of Olympos LLC., who was in charge of the design of M-02J, as well as his teacher, Dr. Hidemasa Kimura who was involved in development of Gasuden Koken, which set a world record before the war and Shusui, showing the connection between the two people involved in Japanese aircraft design.

For many industries, not just development of aircrafts, it’s really difficult to regain once the know-how and creators are lost. It seems that there is something in common with traditional techniques that have been in decline because of lack of their successors, or closure of long-established stores due to the corona virus pandemic, or even culture and art.

It’s not just a problem for the aircraft industry that we can’t create an environment for production and services, that human resources flow overseas and that comes to an end before we can protect it. Even so, even in the absence of any environment, the activities and will of Hachiya and his colleagues made it possible to realize the production of the aircraft on their own without any sponsorship. We’d like to present the fruit of Hachiya’s long time effort in this venue, at the former cardboard factory which was built in this place that was completely burnt by the air raid, shortly after the end of the war and had played a part in the postwar industrial recovery.
In this exhibition at MUJIN-TO Production, you can see the different aspect of previous exhibitions of the OpenSky project.

This is a rare opportunity to see the aircraft that Hachiya himself actually rode in the gallery, which was created as a symbol of “the end of the conflict and reconciliation”. We hope you’d enjoy the exhibition, which connects the war and the present by airplane.