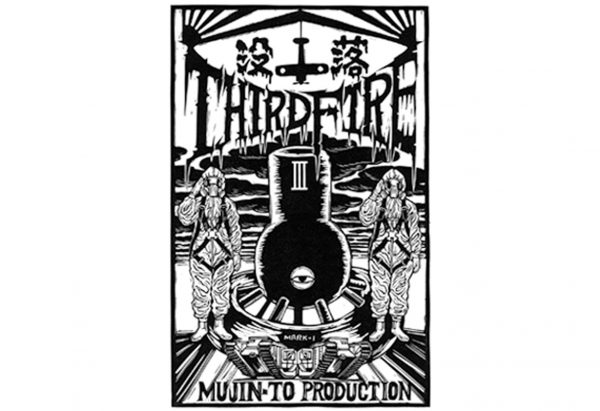 We are pleased to announce Sachiko Kazama’s solo exhibition “BOTSURAKU THIRD FIRE”
What Sachiko presents at this exhibition is “the fall of the atomic industry and its surrounding power.”

Regarding combustion of oxygen as “the First Fire” and heat produced by heating element as “the Second Fire”, the atomic industry celebrates heat produced by nuclear fission as “the Third Fire,” the birth of a new scientific and technological breakthrough. This, “Third Fire,” is the very subject for her solo exhibition featuring three pieces; a 4 meters wide new woodprint work “Alas! Heisoku-kan (Raging Battle-ship the Dead-End),” and “Mark-I in Dawn ” and “Prison NUKE FISSION 235” both almost 2 meters wide.

“Alas! Heisoku-kan (Ragin Battle-ship the Dead-End)” is a work that questions the safety myths of the atomic industry. Japanese government has repeatedly concealed accidents and factors, while appealing its “safety” without making serious and sincere inspection. You can say that the attitude underestimating safety and the negligence resulting in rough-and-ready construction have brought the accident at Fukushima Daiichi Nuclear Power Plant.

Just as there are “Fuzoku Gaho (Manners and Customs in Pictures)” for the Great Meiji/Sanriku Earthquake as well as the Hiroshima Panels by Maruki Iri & Toshi for the a-bomb on Hiroshima, Sachiko tells that history paintings are the breakwater for forgetfulness, and herself created the chronicle of the atomic energy including Hiroshima, Nagasaki, Bikini and Fukushima.

In her piece “Mark-I in Dawn,” you can see the nuclear container Mark-I for the Reactor 1 of Fukushima Daiichi Nuclear Power Plant under construction. “The Army Airfield of Iwaki” was the name given to the land where Fukushima Daiichi Nuclear Power Station now stands. In 1940 the “National Mobilization Law” had been enforced, and in 1945, the last days of the war, numbers of young soldiers flew away from the site then used as an airfield, in order to commit suicide attacks. After all, on Aug 9, the same day when an a-bomb was dropped on Nagasaki, the airfield was attacked by the US carrier-based aircrafts, and destroyed within following two days. Sachiko carves out the layers of national control and policy buried in the history there.

The piece “Prison NUKE FISSION 235” depicts six electrons surrounding a nucleus, flying out from the ex-Department of Interior, the Metropolitan Police Department and the Diet building. Sachiko also focuses on the “research grant” of the Japanese national budget, revealing the moment when the exposed country Japan started its fission in the name of the flowery statement “peaceful use of atomic power.”

—–
The “Third Fire,” a scientific fantasy, had been taking its dreamy path yet there surely is immatureness in its safety and control. What was waiting after the irrational control and ideal was, ironically, the inevitable fall. Now that we all witnessed the fate of the uncontrollable force that rules human beings and even things beyond our human world, it is time to steer ourselves and our society again, following predecessors’ words, such as “follow the power of nature” by Matsuo Basho.
【Sachiko Kazama, 2012】
—–

Please come visit to feel the anger and warning against history Sachiko had carved out.