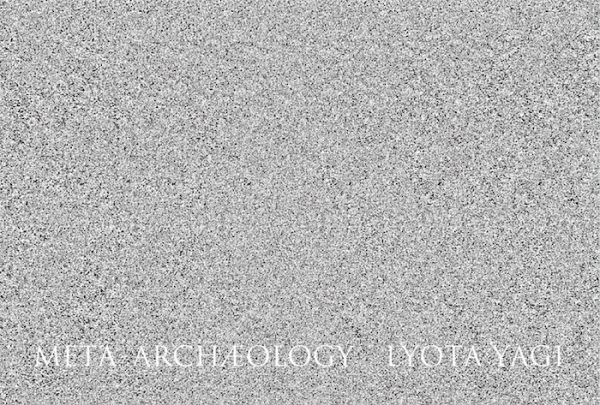 MUJIN-TO Production is pleased to announce “META ARCHAEOLOGY,” a solo exhibition by Lyota Yagi, featuring new works focused on the archaeological method, such as excavation, restoration, conservation and measure.

Yagi had been creating various installation works featuring sounds, words and recording medium, using old and new technologies from vinyl records to color analysis application.
Why archaeology now? What brought the artist to the theme?
Yagi says that at the present time it feels freer to think about the past than thinking about the future.

While having had opportunities to actually see historical ruins and archaeological cultural artifacts and participated in the pre-discussions for World Archeological Congress and been exposed to the thoughts of scholars, Yagi says that he felt the universe closer by thinking of ancient civilizations, culture and life.

We had expectations and admirations to the new era in the 20th century. After 16 years have passed, we started to see the reality of 21st century. While technology evolves, what we face is uncertain future. By returning to the origin of human being and inspecting the primitive actions and hidden potential strength from the ancient times now, we may see further ahead of the future.

In this exhibition, Yagi will present new works which visualize the depth and weight of the time by employing the media art technique: a work using random-dot stereogram inspired by rock drawings in Val Camonica, Italy’s UNESCO World Heritage where Yagi visited as part of a field trip conducted by Mildura Palimpsest Biennale (Australia) in 2015, a work using ceramics and noise is based on an idea conceived from straw-rope patterned potteries from Jomon period as well as a work to hunt out the sounds buried in the sand.

Through experiencing Yagi’s new works and the excavation site like exhibition, we hope that it would stimulate the senses not much used in the daily life and evokes imagination to the past and the future, and create the new thought for the future.