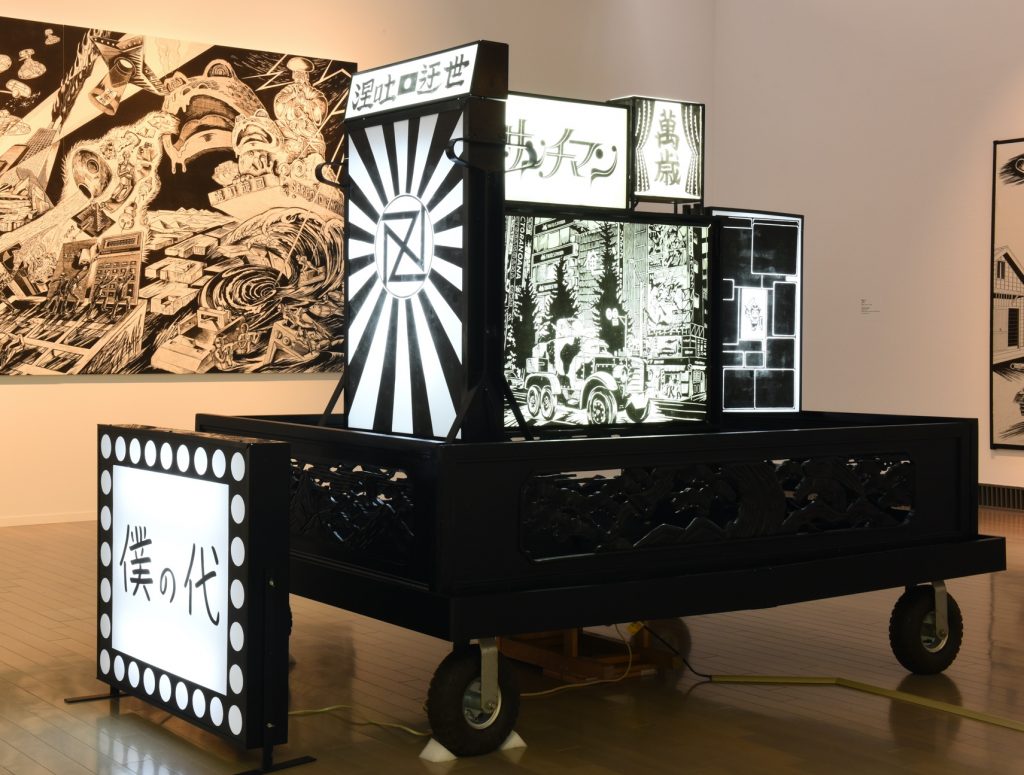 With the awareness of being a social failure, people talk big in the internet world and behave as if they were a winner—carrying such a dark paradox, the illuminated car Boku no yo departs from their own world (their tiny room) and makes a triumphant return.

“Black illuminated car - Boku no yo was produced in 2008, the year Akihabara massacre occurred, which a 25-year-old man indiscriminately killed seven people and wounded ten others. I was shocked by the rampage and created this work to put a negative world hidden behind the incident into a shape. The murderer was so-called Otaku and said to have been troubled with social incompatibleness and sought refuge in the Internet.
Netizens’ characteristic aggressiveness, emotion towards outer world through a filter of Ressentiment, hatred against normalfags and violent words against hypothetical enemies (leftist, etc.) are overflowed in Internet forums. It reminds me of decorated streetcars in victory parades during the wartime and victorious propaganda by the Imperial headquarters during WWII.
The materials (bed, lightbox display, wheels, etc.) used for this work are trophies I won at online auctions. A hearse-like car is equipped with the lightbox displays with woodcut prints depicting a fascism-like symbol, Internet slang ‘Netouyo’ (Internet-rightist), an armored car at the crime scene in Akihabara, boys attacking with their mobile gadgets from the trench, an isolated hero in online game and pachinko hell, and returns in triumph with lonely glory that we are not defeated.
I think it is idiotic and ugly to be proud of being a netizen and spew out abusive language in daily life. But on the other hand, there is a moment where I almost feel sympathy when I read their comments on the Internet. It seems to me that such negative feeling is slowly winning sympathy while revealing ridiculousness of extreme lone fascism, and aggressiveness to others is leading the society towards fascism-like thoughts before one is aware of it. There is a dark indication of heated and establishing negative world in this Black illuminated car created 10 years ago.”