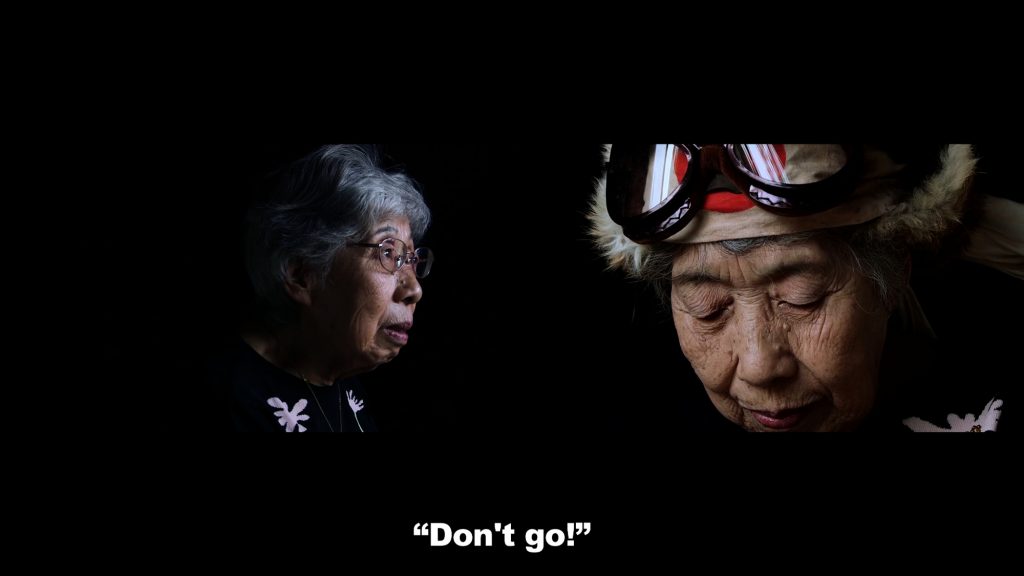 The video "Double Projection #2 (When Her Prayer was Heard)" focuses on the iconic figure of the kamikaze pilot. For Koizumi, the figure of the kamikaze pilot offers the possibility to not only investigate the theme of Japan’s national identity, specifically its problematic post-war evolution, but also forms a means through which to resolve it.
"Double Projection #2 (When Her Prayer was Heard)" is the story of a woman who lost her boyfriend through a failed mission. First, she prayed so hard for him not to be selected for Kamikaze mission. But despite her prayer, he got selected for it. After the war, she believed that he died of the Kamikaze mission, but then later found out that his death didn't get qualified as noble/ heroic death but as failure. Ken is officially a not kamikaze pilot.
This is a quote by the artist about the video:
"Listening to a woman talk about the Second World War, we encounter a unique intensity that stems from the fact that all she was able to do was pray, unlike that of a male's, whose stories are laden with gruesome imagery of battle and moral dilemmas deriving from Japanese heroism. I focused on how the woman deals and discusses the tragic news that was brought to her, which put her strong prayers in vain. I have intervened in the mechanism of her sadness, in hopes to give form to the complex emotions that envelop a woman called, Kazuko Nagura, and the contradiction of the world we live in."