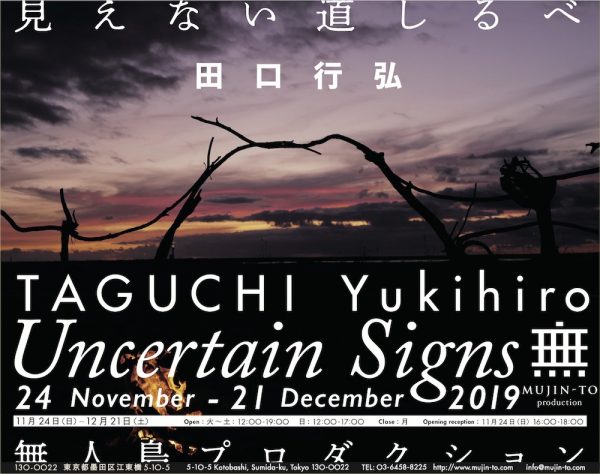 This exhibition will feature video installation centered on Discuvry, a project which Taguchi has been continuing since 2013. Discuvry is a documentary that begins in a vacant lot in Berlin where Taguchi had built a tiny house with discarded materials and followed his daily life there. After living two years in the house, Taguchi demolished and stored the house in a container. The house had traveled and exhibited in Denmark as a mobile house, and in October this year, it was moved to Kanaiwa beach in Kanazawa for a limited time. Next year, the project will move to a German lakeside.
Taguchi considers establishing the foundation and lifeline itself at the place where the house has moved as “art production,” and the project has been updated as he leads “production” and “daily life” in parallel. Taguchi says that Discuvry embodies a microcosm of the world. Developed in public spaces in various locations, this project is to enjoy anything that comes, from local colors, natural environment, people, food, to garbage. In this way, the project continues including the environment and various issues surrounding our lives, such as economics, natural disaster, communities and division. Taguchi faced, shared, contemplated and created works without refusing any values he had encountered on the process.

Discuvry formed the basis of Taguchi’s creation and concept, and this time the recent and latest works carrying that spirit will be featured.
His latest work, Discuvry in Kanaiwa (2019) is created during Artist residence program (AIR) in Kanazawa, in which he connected with locals, while staying in the house built on Kanaiwa beach from this summer till last month. Another work created also in Kanaiwa is whereabouts (2018) under the theme of making “place” for number of drifted objects (sandals, driftwood, plastic bottles, etc.) Other recent works include Okurimizu (2018) staged on the pond known for the legend of dragon god and created for last year’s Echigo Tsumari Art Triennale and α (alpha) (2015), created in Athens in the middle of economic crisis in which Taguchi keeps climbing up high in the video. These works will be loosely connected within the installation made with countless driftwood and plastic bottles washed ashore on the beach.

The title of this exhibition “Uncertain Signs” contains Taguchi’s thoughts coming from his experience by working in various places.

For example, destinations of a country, world, economy, environmental change is not visible like road signs. So how do you take the helm?
Referring to the information you receive from various directions, in the end, including whether or not you believe in that information, you’ll put up a sign based on your intuition and experience and move on to the next action.
Everyone is standing at an infinite crossroads in their life, choosing the way and keep going. The sign is invisible but it is definitely present. At the same time, I feel that the fake signs are scattered on the way as well.
I look deeply into the signs and I want to make sure which one to take, so I won’t be confused by fake signs and my value will not be dominated by immediate gain.

Today, unforeseen events occur constantly and the situation won’t allow us to be optimistic for the future, and often it makes us anxious. Even so, we have to predict our own signs and move on.
Based on assumption that we are to coexist regardless of different positions, thoughts and values, we will choose the way and walk on. It will require strong will but even in such a situation, we will find our place while living bravely and enjoying moments light-heartedly. Taguchi’s such will is deeply reflected in his works. We hold the exhibition hoping to follow the way of Discuvry which can be said to be Taguchi’s life work, always accepting new encounters and growing slowly and freely.