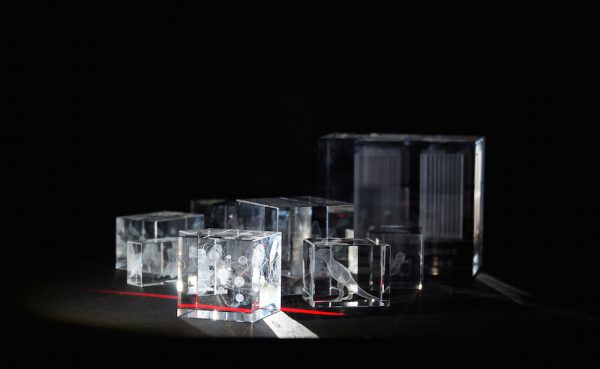 The exhibition is the first time in two years at MUJIN-TO Production and Yagi is going to show the group of new works, developing further the themes he’d been working on such as light, sound, perception and dimension.

“Lazy Susan” in the title of the exhibition, “MUSIC FOR LAZY SUSAN” refers to a turn table often found at Chinese Restaurant. Susan is the name suggestively used to describe a waitress in 20th century and the turn table was introduced as a new invention to free the waitresses from labor, sold with that catch phrase.

Yagi had been producing number of works with rotary motion, using vinyl records, potter’s wheel and globes covered with cassette tapes for his creation under the theme of perception. That is to shift the audience’s point of view by shaking their various senses of perception as the rotary motion is the most effective method Yagi employs.

This time, Yagi develops his show around “Lazy Susan,” placing a turning table in the center of the gallery. The center piece of the exhibition, Music of Lazy Susan is a sound art consists of three-dimensional crystal objects which Yagi had been collecting placed on a turn table as the laser beam scans the objects and picks up the sound. Another main work, The Spinning Dancer uses literary a rotating object, using silhouette illusion and making three-dimensional object viewed as flat, replicating effect of illusion on three-dimensional object.

The other works on view evolve around sound, such as a tower of loudspeakers and a playful work which Yagi turns “Language Pal* an educational device into a scratch machine like instrument. Yagi rearranges the original usage of the objects, mixing with various elements and creates the works stimulate the senses such as visual, sound, equilibrium and time.
* Language Pal: A device for language and auditory training to treat aphasia.

What fascinating about Yagi’s works is that he shows different way of seeing things and gives different meaning to the objects used in certain way and by doing so, Yagi represents the essence of these objects.
We hope you’d acquire a new way to see ordinary things differently, with your senses of sound and visual stimulated by this exhibition.