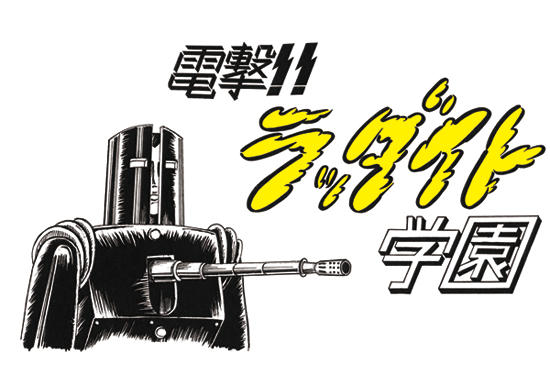 In this exhibition, Kazama takes “School” as a system or machine of violence and created the series of story based on that notion. “Luddite” in the exhibition title is coming from the movement in early 19th century, initiated by workmen destroying laborsaving machinery as a protest, fearing that they may lose their job in industrial midland, northern England. In the background of the works staged in school in this exhibition is based on the unreasonable experience Kazama had when she was a primary and secondary student. Kazama had the feeling of doubt on totalistic tendency hidden in the school system.

There was a lot of violence in schools on late 1970’ s and early 1980’ s when Kazama was in a childhood. The mass media reported violence happening in schools day after day. In addition, there were number of TV series and comics featured school violence and the leader of school gangs, which became social phenomenon in that time.

In 2010’ s, the situation in schools and children seem to be more complicated. Things are becoming harder to be seen from outside such as bullying, dysfunctional classrooms and development of SNS which enables children to connect with each other secretly, in comparison to the more visible way of rebel like breaking the classroom’ s glass windows. However, something unchanged is that putting weight on importance of “the whole than individuals.”

What Kazama presents in this exhibition is that the student ruled by school, the misfits and the student who is persecuted, all has possibility of becoming violent. Kazama’ s version of ‘luddite movement’ is ironic and funny. These works are her imagined caricature in which the students mechanize themselves by gaining violence within the school she captures as violent machine.

Kazama sees the seeds of violence, which has possibility of leading to the mechanization and bigger violence = war in motif of unavoidable educational system and a small society called school, which has huge impact on children’ s growth as well as the ressentiment smolders in the modern society. With Luddite school, Kazama suggests such story in the series of works uniquely executed in her ‘non-sense style.’