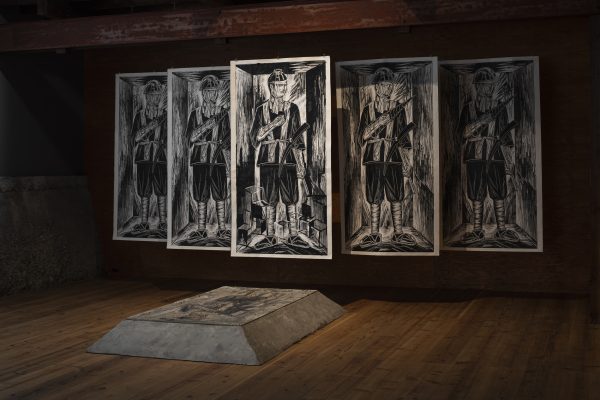 The theme of Kurobe Gold series is a modern ‘new order’ that humankind have designed nature for own good with the development of civil engineering technology using concrete. Kazama finds a symbol of the new order and a miniature of the history of Japan’s modernization in ‘dam’ constructed in the wilderness. The series overlaps the story of The Rhinegold, the first of four music dramas of The Ring of Niebelung by Richard Wagner, which depicts human egoism and their lust for domination by likening human to Gods.

This exhibition draws the flow of the Concrete Suit, with focus on cement, a raw material for concrete, and limestone used for cement.
*Cement is obtained by firing and pulverizing limestone. Concrete is a mixture of cement and water, which then binds with sand and aggregates such as gravel.

Limestone is a carbonate sedimentary rock that is often composed of the skeletal fragments of corals and other organisms that have solidified over many years. Limestone has been used to develop civilization since ancient times, such as the Egyptian pyramids, Greek and Roman temples, and the white walls of Japanese castles. In the long history, limestone has become an indispensable part of human life. In particular, cement which emerged after the Industrial Revolution has played a major role in the development of various industries through the evolution of various technologies.

At first glance, this seemingly inorganic raw material is a mineral that has been created by repeated births and deaths of organic matter in tens of millions of years, reflecting the history of the earth. Given the eternal span of oil and limestone that humankind calls a natural resource, the time we have spent consuming them will be a single blink, just a fraction of a second. The fear of wasting and eating away without a feeling of awe for piles of dead organisms is forgotten by modern landscapes, which has been developed with efficiency and rationality. The skyscrapers built with the limestone grow in proportion to the quarried mountain lost its shape. The buildings can be seen as a symbol of the glory of mankind, but at the same time it could be said to be a cement tombstone. Kazama’s new works at Cement Cemetery points out this contradiction and issue.
Kazama’s consistent concept, finding a clue to the contemporary issues from the past and foreshadowing, has been synchronized with the long history of cement and limestone.

One of the two newest works, Cement Cemetery, uses the frottage technique to express the process of a lime mine turns into a “gravestone.” In another work, Cement Mori, the installation using woodcut, expresses an irony of a mine worker who quarries lime is also an undertaker who cuts down the nature. The exhibition will show the range and development of Kazama’s expression in a way slightly different from Kazama’s conventional woodcut works.

How can we reconcile with the issues that anyone living in this modern society cannot be indifferent while being aware that we are an accomplice of the times? We hope that you would find a suggestion about this endless question from Kazama’s new works.