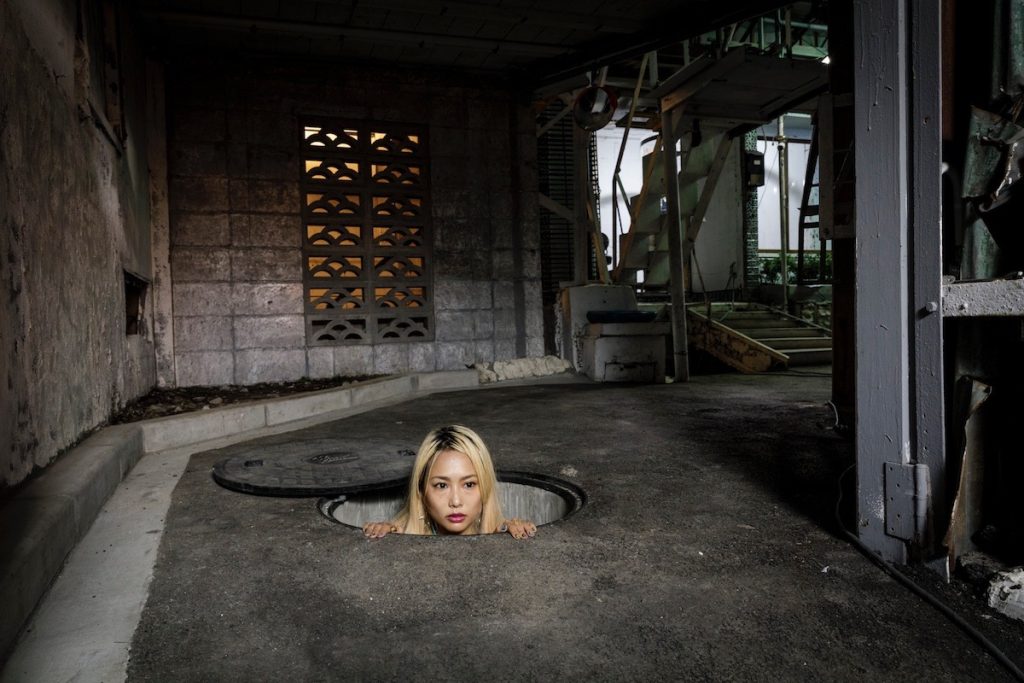 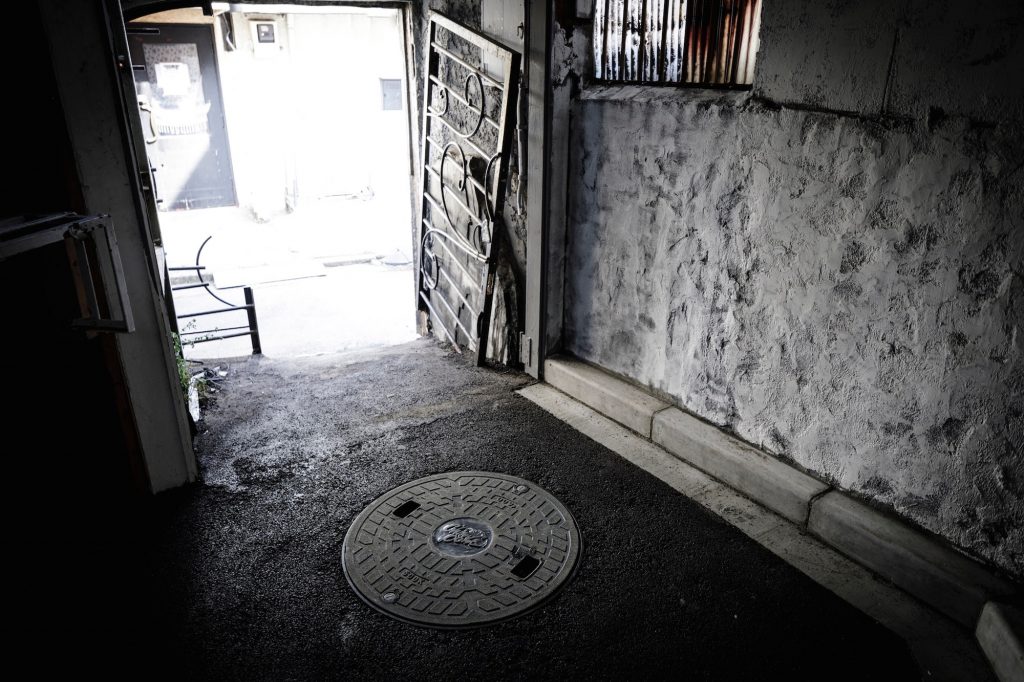 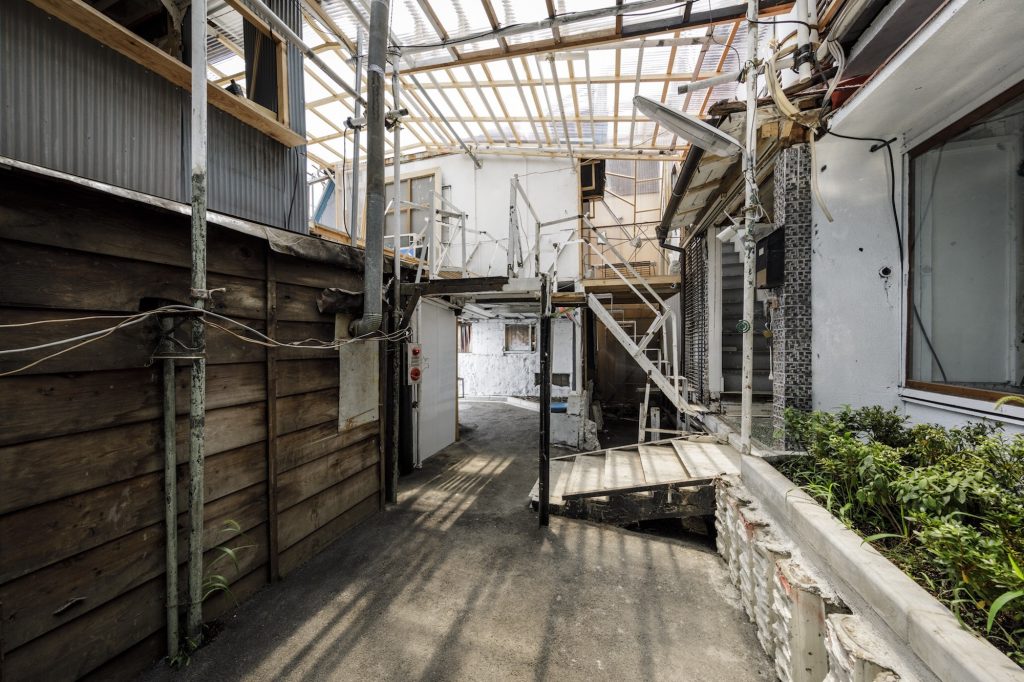 Chim↑Pom Street, 2017, The street is built inside Kitakore Building in order to connect the space to the outdoor public street. By opening it up to the public for free at all hours, Chim↑Pom created a public space within a private space. Kitakore Building was remodeled in the past to connect two houses into one building by placing a roof on top of the street between them. Although the person who carried out the remodeling remains unknown, this approximately 70 year-old building holds a D.I.Y. architectural history of being extended and remodeled by each of its various residents. Given this background, Chim↑Pom made this work to recreate the original street that had previously existed between the two buildings. Because it serves as a private street as well as a public space, they designated the works displayed around the street as public art, the bathroom as a public restroom, the bar as a street-level shop. 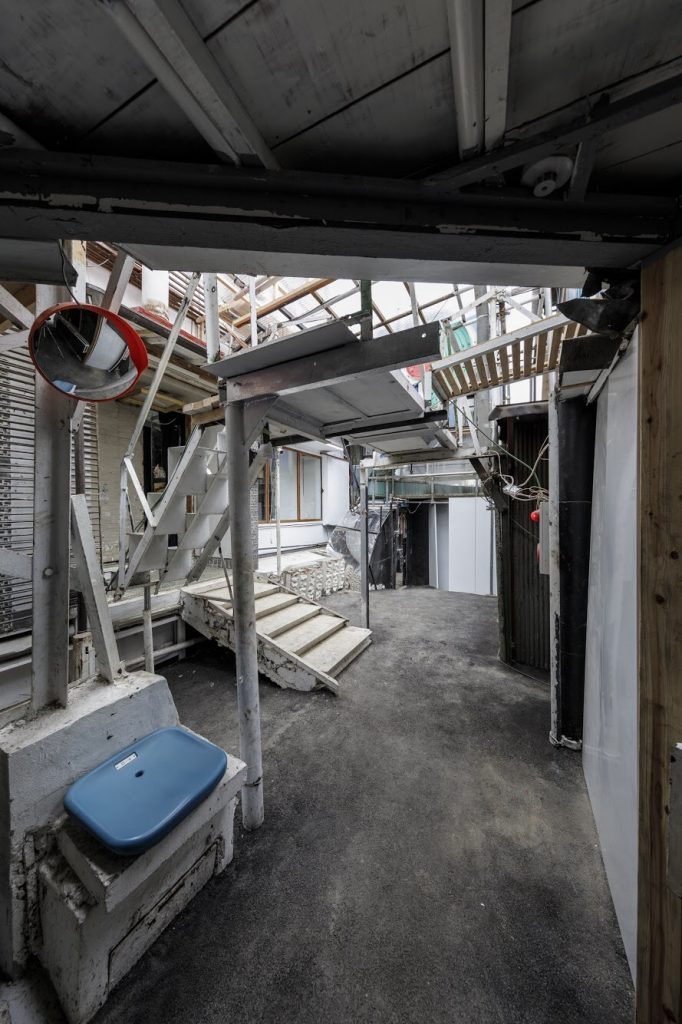 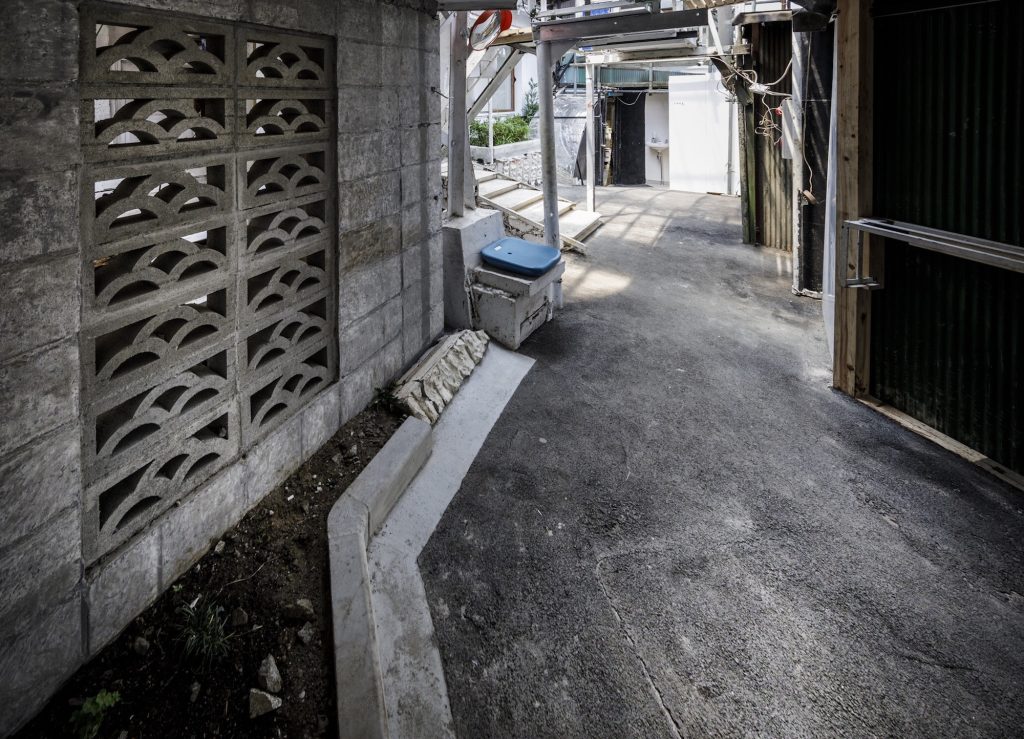 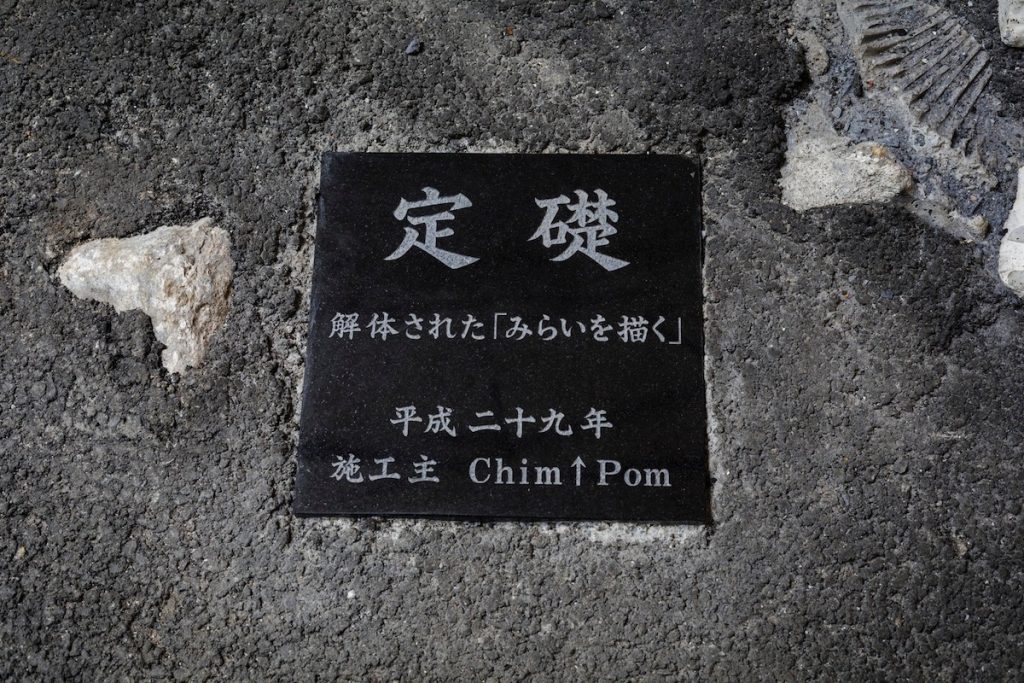 Mirai’s Reclaimed Land, 2017, After digging a hole inside Kitakore Building, Chim↑Pom buried Drawing Mirai, a blueprint drawing depicting sex worker Mirai’s silhouette that was originally created for “So see you again tomorrow, too?” With the motif of a young person who calls herself “Mirai” (meaning “future” in Japanese) and the rapid degradation of cyanotype as a material, they incorporated elements of burials, time capsules, and aging into their process. Furthermore, this spot was determined as the foundation of the Kitakore Building’s renovation, and a teisoseki [foundation stone] was buried into the asphalt as a token. Since 2016, this piece has been transformed from Drawing Mirai → destroying the drawn Mirai → burying the destroyed Mirai – it will reach its final form when it is excavated during the demolition of Kitakore Building in the future. 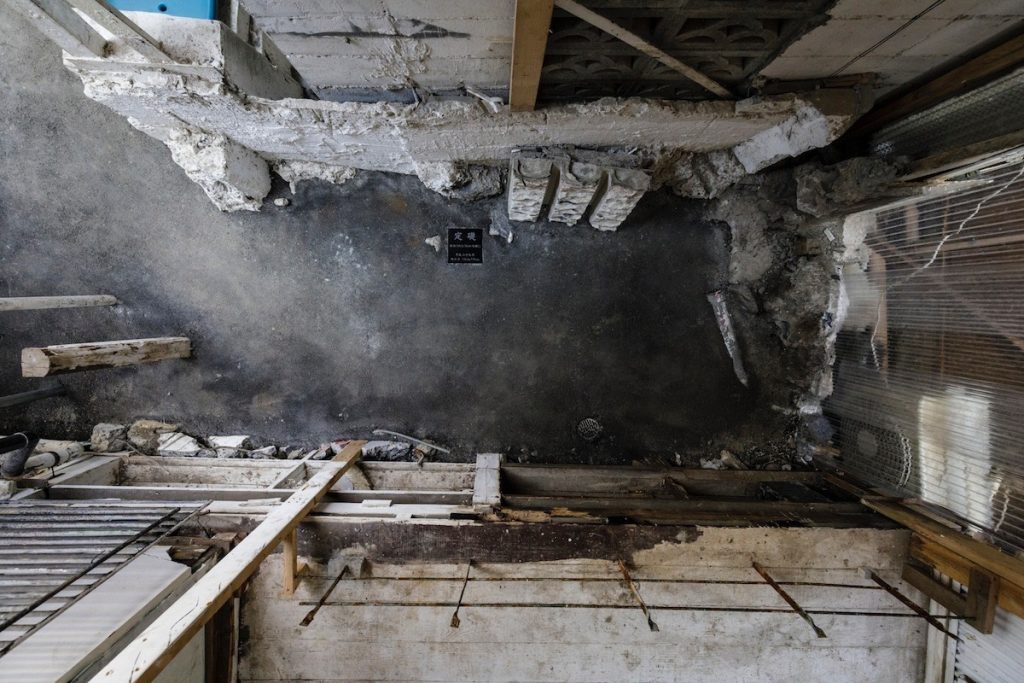 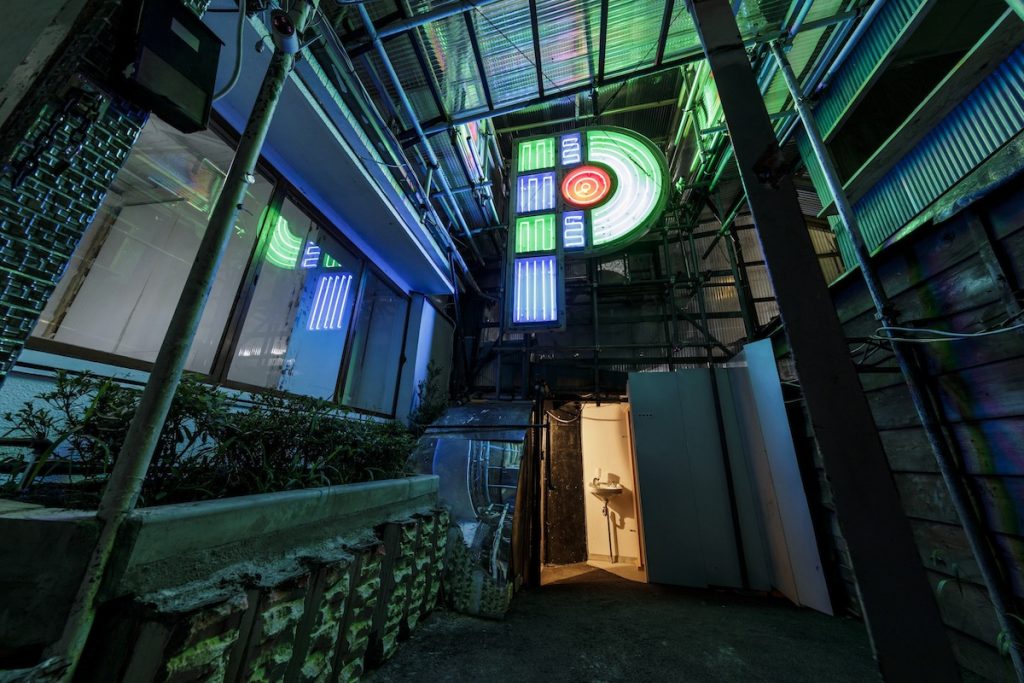 PAVILION, 2012/2017, Neon sign and music This is the Kitakore Building version of PAVILION, a project installed in the gallery inside Shibuya PARCO by removing the C and P of PARCO’s exterior neon sign for Chim↑Pom’s solo exhibition there in 2012. By flashing the neon sign with synced music in an enclosed space to emphasize its spectacular nature, the piece, taking their initials, served as a kind of self-portrait of Chim↑Pom who grew up in this consumerist society. Since the PARCO building in Shibuya was demolished in 2017, the neon signs were again removed and were decided to be kept temporarily. For this exhibition under the theme of “scrap and build,” Chim↑Pom borrowed and displayed the P inside (street side) and the C outside. These initial letters for Private, Public, Common, and City among others symbolize concepts of ambiguity or discontinuity in the public and the private, created with Chim↑Pom Street both inside and outside of Kitakore Building. 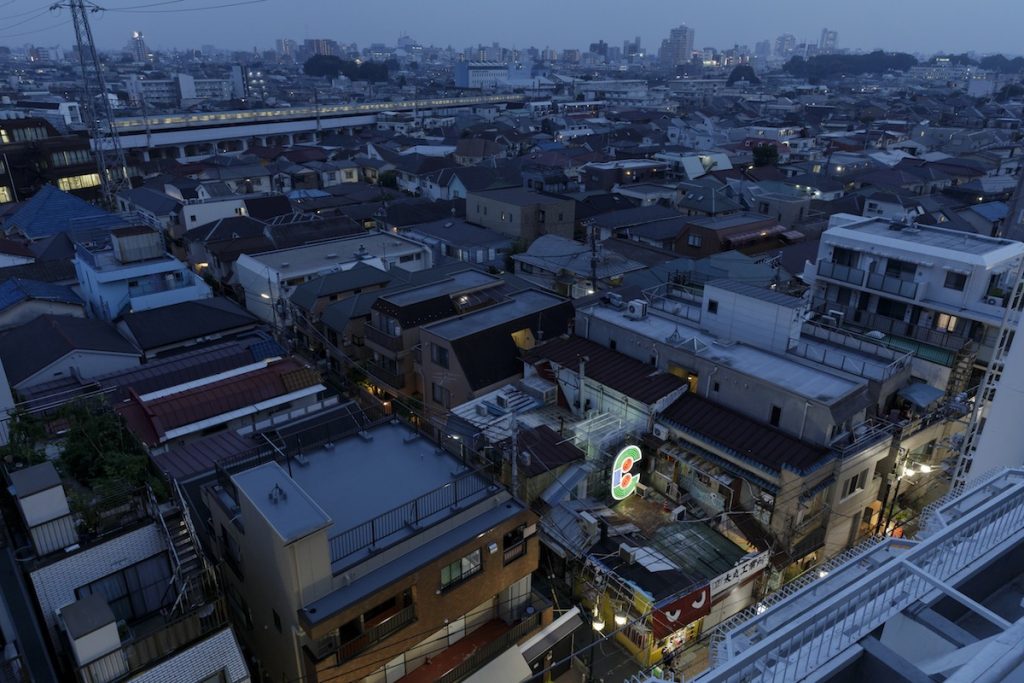 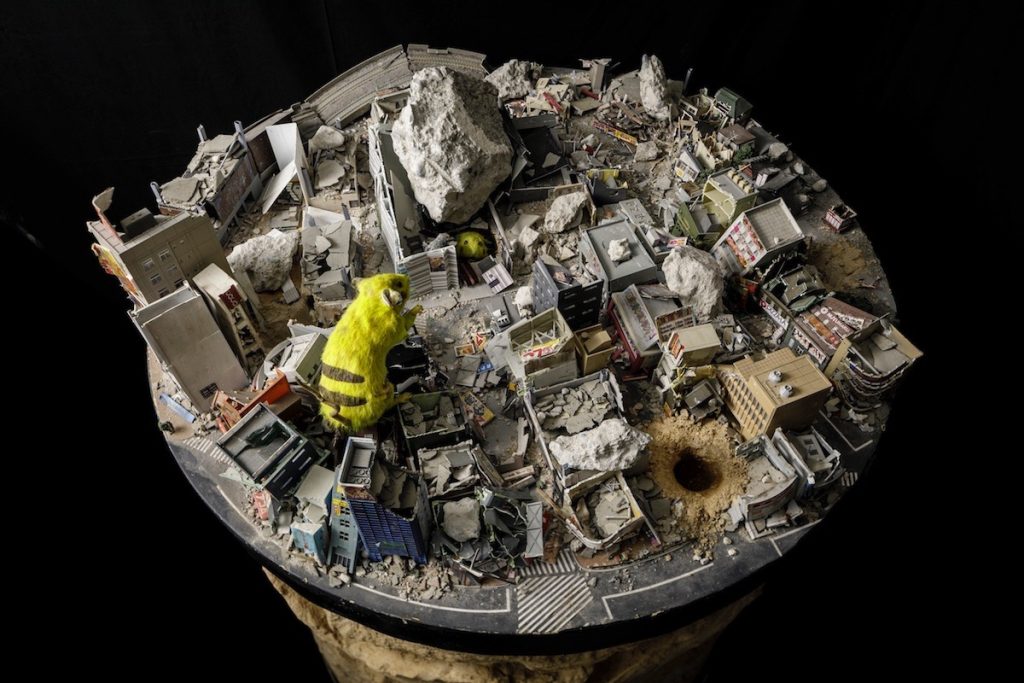 SUPER RAT -Scrap & Build- 2017- Rats, stuffed rats captured in Shinjuku, demolished of Kabukicho diorama, soil, plaster, cat bones excavated in Kitakore Building, PVC sheet, iron frame, rat food, water, concrete fragments, video This is the second version of the Kabukicho diorama and Super Rat, presented at “So see you again tomorrow, too?” that were destroyed along with the demolition of Kabukicho Shopping District Promotion Association Building. Chim↑Pom dug a hole in the diorama of the completely destroyed cityscape and created a soil pedestal. By keeping rats that nest inside, the pedestal forms a street and city made by rats. After the exhibition, they will pour molten aluminum or plaster into the nest and create a three-dimensional work molding the cityscape as a pedestal, and combine it with the diorama and stuffed rats to complete the piece. Production support: Kenta Nishimura, Toshihiko Yo, Photo: Kenji Morita 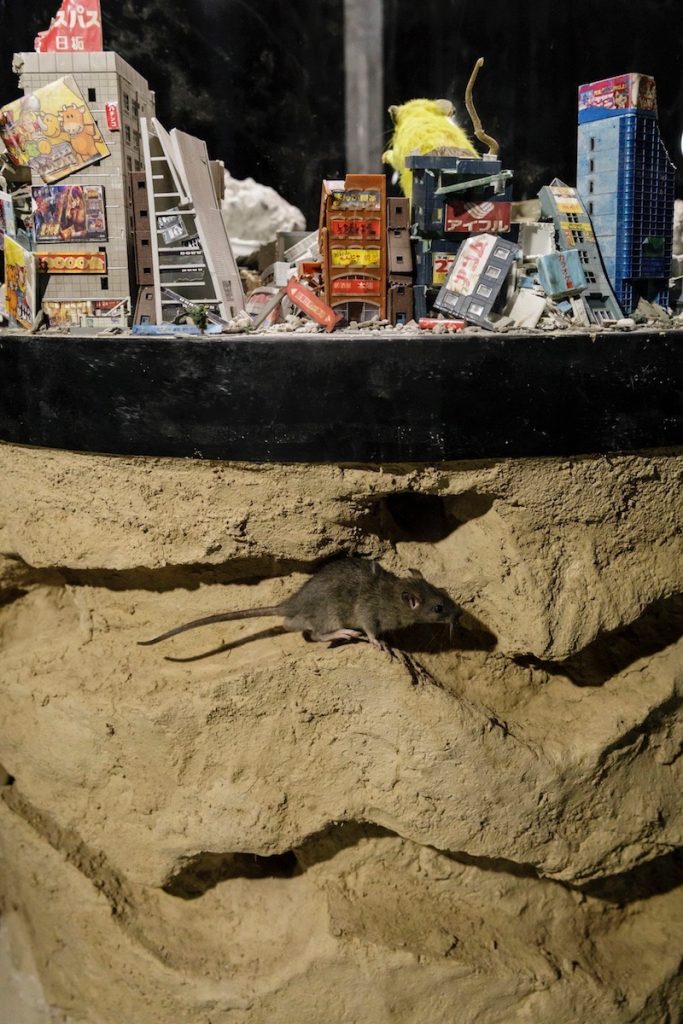 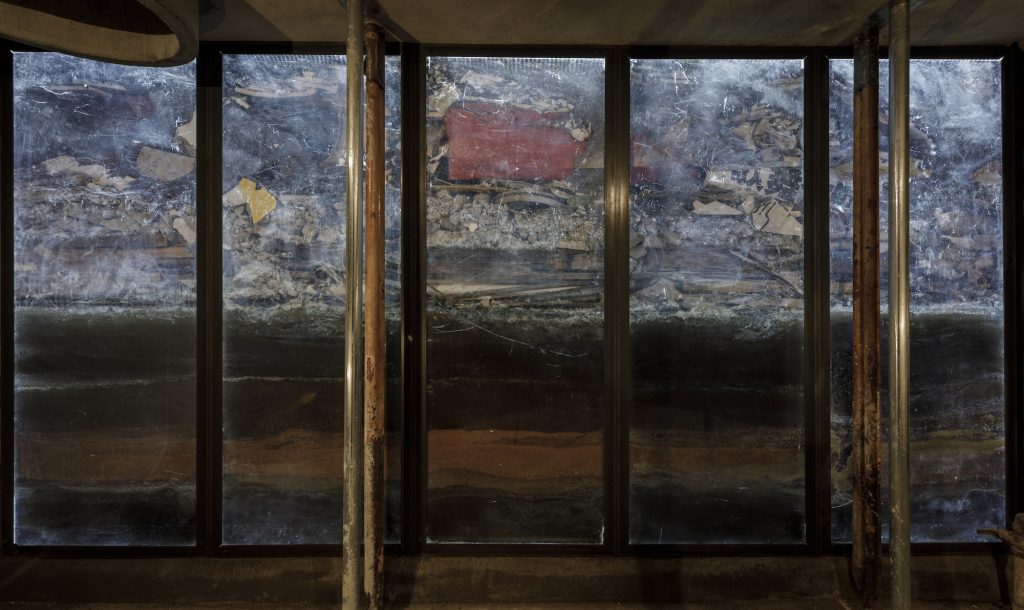 The Road Show, 2017, Soil monolith using waste material and soil collected around Tokyo, acrylic, the basement of Kitakore Building Using layers of waste material from the production of Chim↑Pom Street as stratum, Chim↑Pom created a sample that is permanently displayed in the basement of Kitakore Building. The piece draws on landfills composed of waste and construction waste soil that are the likely extreme poles of Tokyo’s “scrap and build” culture. The remains of demolitions that took place around Tokyo, such as that of Shibuya PARCO, Kabukicho Shopping District Promotion Association Building, Kitakore Building, and the National Stadium, along with works from exhibition “So see you again tomorrow, too?” are also used to fill up Kitakore Building’s Chim↑Pom Street. The Pussy of Tokyo, 2017, Manhole cover, Modifying a ready-made manhole cover, this piece covers the passage leading to the basement, where the soil monolith of Chim↑Pom Street’s cross-section sample is displayed.
Sukurappu ando Birudo Project Paving the Street (Chim↑Pom with Takashi Suo) (2017)

A project consisting of a solo exhibition “So see you again tomorrow, too?” held at the Kabukicho Shopping District Promotion Association Building in 2016, another solo exhibition “Paving the Street” held at Koenji Kitakore Building in 2017, and the parties and events held at those venues. The former exhibition, which took place in the midst of Tokyo’s massive redevelopment in advance of the 2020 Tokyo Olympics, used the entire Kabukicho Shopping District Promotion Association Building just before its demolition. The works on display were not removed from the building after the exhibition, but instead destroyed as the building was dismantled. After that, Chim↑Pom picked up the dismantled parts of the building, including the remnants of their work and brought it to their own studio in Kitakore Building. They used those materials to produce permanent works such as Chim↑Pom Street, and The Road Show.


Statement
Announcing the opening of the street

Chim↑Pom are pleased to announce the opening of the street of Kitakore Building, which we have been working on since 2017. Named as Chim↑Pom Street, it will be open to the general public at all hours and anyone may enter for free from nearby public streets and driveways.
Kitakore Building located in Koenji is estimated to have been built around 70 years ago. Since two buildings were joined as one, it has enjoyed a rich history of serving as a psychic facility, a brothel, an abandoned building, a bar complex, a fashion building, and more. The building resembles a kind of shack, with its residents constantly extending and remodeling it in a DIY fashion.
Chim↑Pom also started renting out the space in 2014 and since then we have operated our own studio, gallery, and shop among others. The street space, which Chim↑Pom and architect Takashi Suo jointly open, was developed to reproduce the old street that seems to have existed between the two original buildings. However, since its view also includes the long history of the building being used as an indoor space, we constructed it so that at first glance it remains ambiguous whether it is a private or public space.
In other words, it is a public space created inside of a private space. We hope that many of you will join us in cultivating such a street. Incidentally, Chim↑Pom has long been known as an artist collective that repeatedly uses public space and public art for personal use without permission, and as such we take pride in our various approaches to the concept of the public. So at the moment, we do not plan to set rules for using Chim↑Pom Street. However, if neighbors, other residents of the Kitakore Building, and even we Chim↑Pom feel the need to do so at any point, we will set rules.
The space is too narrow for cars to pass through, but we may set a speed limit in times of traffic. If we feel the danger of a fire hazard, we may ban smoking on the street. If tasteless posters or graffiti become rampant, we may ban posters and vandalism.
We do not have enough time to strengthen patrols, but before advocating for the public this is a rental property first and foremost, so there may well be a chance that we infer the landlord’s feelings.
In addition, we will host an exhibition-style event to celebrate the opening of the street. As the second part of Chim↑Pom’ s solo exhibition, “So see you again tomorrow, too?” which was held in Kabukicho Shopping District Promotion Association Building in Shinjuku in 2016, this exhibition centers on the concept of “scrap and build” that is currently overdone in Tokyo. We have named this series of shows as the “Sukurappu ando Birudo Project.” Remnants of the artworks––which were kept in the building and half or completely destroyed during the demolition after the “So see you again tomorrow, too?” exhibition––turned into material for the new works for this exhibition. Kitakore Building also became part of these works through DIY construction.
Compared to Kabukicho Shopping District Promotion Association Building which possessed a public element and was constructed with sturdy concrete, Kitakore Building carries completely oppositional elements. While Kitakore Building draws a gap and bears a contradiction within the project, it is presented as a kind of space to process the building’ s demolition likely occurring in the not so distant future.
Some of the works will not be complete in its final form for this exhibition, but will be presented as finished works at their own timing or after the exhibition. Especially with regards to Chim↑Pom Street, its character will transform depending on how you all will use it during the opening event.
We look forward to seeing you at the opening and on the street.